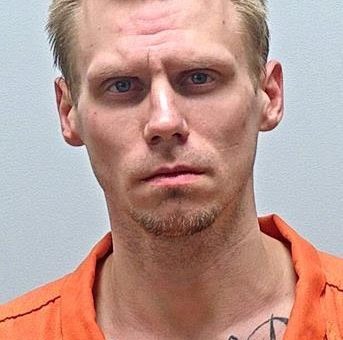 (NOBLE CO.) – Tuesday afternoon, Trooper’s from the Fort Wayne Post arrested an alleged car thief who led them on a high-speed vehicle pursuit through Noble and Whitley Counties.

Police arrested 27-year-old Nathan Lundgren, of Angola, on charges of possession of stolen property, resisting law enforcement, aggressive driving, operating a vehicle while driver’s license suspended and reckless driving. He is being held in the Noble County Jail.

The incident began at approximately 3:45 p.m. Tuesday when Indiana State Police Trooper Richard Williams located a stolen Pontiac Trans Am on State Road 9 just south of Albion, in Noble County. This vehicle had been reported stolen from the Angola area earlier that morning.

Trooper Williams attempted to stop the vehicle, however, the driver had other intentions and sped off, initiating a high-speed pursuit.

Trooper Williams reported vehicle speeds on the rural stretch of State Road9  up to 115 miles per hour.  Recognizing the risks associated with a vehicle entering the populated area of Columbia City at those speeds, Trooper Williams quickly coordinated a plan with Master Trooper Joe McLaughlin to de-escalate the chase. Once the pursuit entered into northern Whitley County, M/Tpr McLaughlin tactically positioned ahead of the chase was able to successfully employ a tire deflation device, effectively demobilizing the stolen vehicle.

After striking the deflation device the stolen Trans Am ran off the road and came to rest in the side ditch of State Road9 south of County Road 500 North, there ending the chase.

At that point Lundgren became physically resistant, but Troopers quickly gained control and took him into custody without further incident or subsequent injury.

As a precautionary measure, Lundgren was examined at the scene by medical personnel prior to being transported to the Noble County Jail. He was booked into custody on multiple felony and misdemeanor offenses and remains in custody pending an initial court hearing.