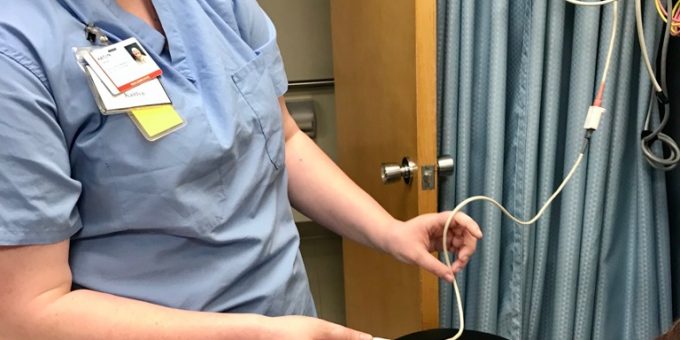 (BEDFORD) – Walking through the IU Health Bedford campus, you might be surprised to see younger faces working with patients and administrative staff.

One of those faces, Alexia Taylor, is a senior at Bedford North Lawrence High School and currently enrolled in the Health Sciences II program at the
North Lawrence Career Center. Three periods a day, Taylor and seven other NLCC students join the IU Health team for a clinical internship while earning health science certificates.

Even more surprising, this program between IU Health and the NLCC is in its first year. That’s because, until the fall of 2019, IU Health had a strict 18 and over policy for anyone wanting to participate in internships or work-study programs. That is until Heather Nash, Program Manager with the Lawrence County Economic Growth Council’s Workforce Coalition, helped to expose the need for change with her push for internships in the county.

“This wouldn’t have happened without the work of Heather, Joe and the Workforce Coalition,” says Baili Campbell, DNP, MSN, RN, NE-BC, who, after getting involved with the Coalition, decided to do something about it.

She wrote a letter to IU Health Bedford’s President, Brad Dykes, explaining why the policy should be adjusted from 18 to 16 years old. Dykes quickly became an advocate, taking the change to executives and ultimately creating a new policy that impacted every IU Health hospital in the state of Indiana.

Starting with IU Health as an intern herself, Campbell is no stranger to the internship process, which begins to explain why she continues to go above and beyond her role in Nursing Administration. In addition to interviewing, placing and supervising the clinical interns, Campbell serves on the Health
Sciences Program Advisory Board and the NLCC Director’s Advisory Board.

She’s also been an integral part of creating the NLCC Strategic Plan and has committed to leading initiatives as it’s implemented this month pending school board approval.

“Her insight has been absolutely crucial to the success of the strategic plan,” says Joe Timbrook, Director of Career Development with the Workforce Coalition. “Dr. Campbell has been the model for employer engagement with the NLCC, and the mutual benefits are apparent.”

There were only five positions planned for the year, but that number quickly grew to eight. “The student interviews were phenomenal. We were so impressed, we had to give them all a spot,” said Campbell.

Interviews are formal, with behavior-based questions designed to bring about a meaningful connection. It’s from those interviews that each student is “placed” in one of eight areas of health science, tailored to their individual strengths and ensuring they’re in the best-fit role. The process seems to be working, as one student has already been offered a part-time job. “We had an opening,” said Campbell, “and this student already knew the team, the culture, and what was expected of them. This is what it’s all about.”

The program is anticipated to grow, with ten positions already planned for next year.

While job shadowing is common, specifically in the health sciences field, NLCC students are able to go a step further by caring for patients, assisting with daily operations and even developing processes.

Like Alexia Taylor, who is currently working with the IU Health IT team to build an app for Clinical Team Onboarding. Something that is historically on paper will be transformed into an interactive, digital tool that will change the onboarding process and better align with IU Health’s mission to bring its education into the digital age.

“It’s something I would have never thought about doing in health science,” says Taylor. “Typically, you think nurses or doctors, but this program has given me skills I can carry with me no matter what career path I choose. It’s a one-of-a-kind experience.”

Right now, Taylor plans to study Criminal Justice at IUPUI, and she’s even had the opportunity to speak and learn from Lawrence County Coroner Rob Herr through the program.

Fostering partnerships between local employers and the NLCC has been a major focus of the Workforce Coalition over the past 3 years, specifically to create these kinds of programs and expose students to local careers through hands-on experiences. However, there are a number of ways employers can get involved beyond hosting interns or creating a work-based learning program.

For example, in addition to the time and resources dedicated to education in the hospital, IU Health has also donated more than $100,000 in equipment and supplies to the NLCC Health Sciences Program. This was meant to help bridge the educational gap between the classroom and workplace, a gap that Campbell says she wouldn’t have been aware of if it wasn’t for her involvement with the LCEGC Workforce Coalition and the NLCC.

For more information on how to get involved with the Lawrence County Economic Growth Council Workforce Coalition, please call 812-275-4493, or email joe@lawrencecountygrowth.com.