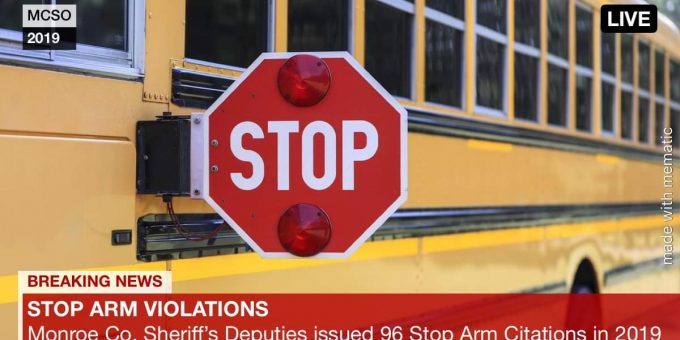 (BLOOMINGTON) – In their efforts to protect children at bus stops the Monroe County Sheriff’s Department issued 96 stop-arm violations in 2019.

According to Indiana Code – A person who drives a vehicle that meets or overtakes from any direction a school bus stopped on a roadway or a private road and is not stopped before reaching the school bus when the arm signal device specified in Indiana Code 9-21-12-13 is in the device extended position or proceeds before the arm signal device is no longer extended, commits a Class A infraction.

Police agencies across the state have been trying to patrol school bus stops following the tragic accident when three children were killed in Fulton County in October of 2018.

Alyssa Shepherd drove past a stopped school bus, killing three siblings as they crossed a two-lane highway to board the bus, and a year later Shepherd was convicted of reckless homicide in the children’s death and guilty of passing a school bus causing injury when the arm is extended.

Prosecutors say that Shepherd was driving a pickup truck that struck and killed twins Xavier and Mason Ingle, both 6, and their sister Alvia Stahl, 9, and also critically injured 11-year-old Maverik Lowe as they crossed the highway north of Rochester on October 30, 2018.

Shepherd faces up to 21 years in prison on the two charges. Sentencing is expected this month in Fulton County.

Criminal Penalties – Drivers who illegally pass a stopped school bus can be charged with a class A misdemeanor punishable up to one year in jail and a fine up to $5,000. If that action injures someone, the offense rises to a Class 6 felony, punishable by six months to two and a half years in prison and a fine up to $10,000.

Recklessly passing a school bus and killing someone is a Level 5 felony, carrying a one- to a six-year prison sentence and up to a $10,000 in fines.

Lawmakers gave the courts the ability to suspend driving privileges for someone who violates the stop- arm law. Driving privileges can be suspended for 90 days or for up to one year for repeat offenders.