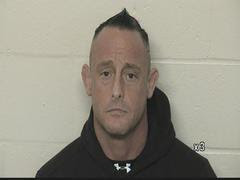 (SCOTT CO.) – An investigation into alleged illegal steroid possession and distribution by a Scott County deputy has resulted in his arrest as well as the arrest of a Scott County reserve officer on related charges.

Undercover officers from the Sellersburg Post Drug Enforcement Section were assigned to the case and began their investigation on Tuesday.

In the early morning hours of Thanksgiving as a result of their investigation, Troopers arrested 39-year-old Deputy Joe Don Baker, of Salem.

Both Baker and Thomas were remanded into the custody of the Scott County Jail without incident.

Sheriff Jerry Goodin advised he would release a statement from his agency on Friday.