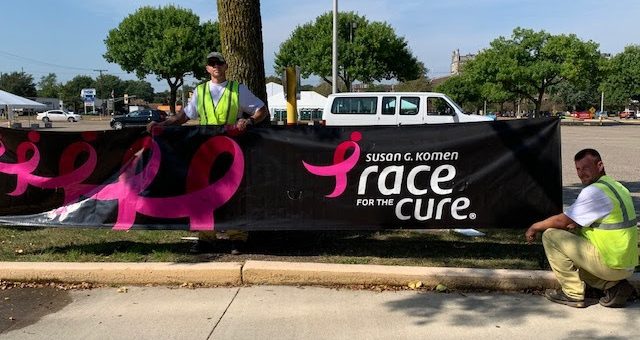 (TERRE HAUTE) – Offenders from Wabash Valley Correctional Facility (WVCF) provide assistance to our local communities on an ongoing basis.  Their work teaches them to be a positive part of society.

Recently they were able to give back by partnering with the Wabash Valley Race for the Cure.  They set up tents and did other tasks as needed to ensure everything was ready on the day of the race.  Their efforts contributed to the success of the event.

They also returned after the race to load the UHaul and take down banners, among other things.  Lori Mitchell the Community Manager of the Susan G. Komen event in Terre Haute stated,  “They were a tremendous help to us.”

“Wabash Valley Correctional Facility feels honored to help Susan touch the lives of so many battling breast cancer.  She is an inspiration, as is the work that others continue to do on her behalf.  This is one event that gives offenders a chance to feel they are truly touching the lives of others that are struggling in our society,” stated Warden Brown.

Susan G. Komen for the Cure is one woman’s promise to work towards ending the stigma and silence about breast cancer, while raising money for research.  Suzy Goodman was diagnosed with breast cancer in 1977.  At that time breast cancer was never talked about.  Suzy made a promise to her sister that she would end the silence.  In 1984 her sister was diagnosed with breast cancer.  Unlike Susan, her sister survived her battle.  She then went on to make Susan G. Komen one of the most influential charities in the world.  More than 1.5 billion dollars have been contributed to research and community programs through her efforts and the efforts of those who have joined  in her battle.