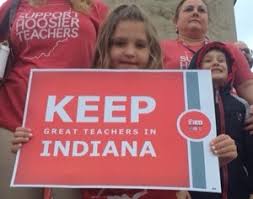 (INDIANAPOLIS) – More than 35 of the state’s school districts have canceled classes on November 19, 2019, for an Education Rally to be held at the Indiana State House.

November 19th is the organization day for the Indiana State Legislature and the educators are looking to make a big showing to those in the Indiana Chamber.

More than 7,000 teachers have registered to be in attendance at the “ Red For ED”  Action Day at the Indiana State House.

The event is set to run from 8:30 a.m. to 2 p.m. It includes meeting with lawmakers, lunch, member stories, and a march on statehouse grounds. Weather and other factors could affect attendance.

State schools Superintendent Jenifer McCormick, who has split from many fellow Republicans on education policy issues, is backing the rally.

The governor’s office said in a statement that local school districts could decide what is best for their students and that Holcomb has made finding ways for long-term pay improvement a top priority.

The teacher unions are pushing back in the use of student test scores to evaluate teachers, repeal of license requirements adopted this year requiring teachers to log 15 hours of professional development regarding the needs of local employers.

In addition, the school corporation is waiting on recommendations from a Visionary Committee that could impact local schools and teachers. The budget for the North Lawrence Community Schools is around $52 million, with over $16 million going to towards the teachers. Over $950,000 of the new union contract went towards teachers. The new contract will be voted on next Tuesday at 6:30 p.m. at the North Lawrence Administration Building.

In April of this year, the school teachers held a breakfast and rally at the Lawrence County Museum. Around 70 teachers and their children showed up in April to show support for school teachers.  13 out of the 16 schools in the North Lawrence Community School District showed up for the rally in April.

The local rally in April was to keep the schools from closing but also to address their concerns. According to Doug Taylor, Treasurer of the Indiana Teacher’s Association, since 2009 it has been very difficult for educators in Indiana.