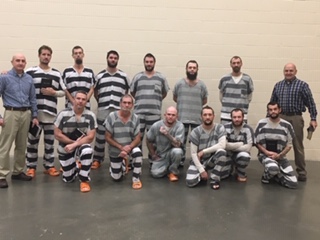 (BLOOMFIELD) – On Monday evening, Tom and Jack Jacob went to the Greene County Jail to tell those inside that Jesus can save them and that they do not have to continue in the lifestyle they are in.

Tom and Jack understand what it is like to be placed behind bars. Both have dealt with alcohol problems and Jack has taken drugs. Both have faced charges of driving while under the influence, illegal possession of alcohol, and criminal mischief.

Tom Jacobs committed his life to Christ on April 17, 2003 at the Tunnel Hill Pentecostal Church in Owensburg. His life was out of control. He was tired of his life and wanted a change. He went to the altar and gave up the lifestyle he was living.

Jack Jacobs got saved while driving down the highway in a Jeep Cherokee, at the same location he had crashed his 1992 Cherokee Jeep that almost ended his life. After the crash the vehicle erupted in flames. His alcohol level that evening was 0.23 – double the legal limit of intoxication.

Pastor Bruce Roberts asked the church to pray for Jack and at the same time Jack prayed to the Lord to save him. On January 15, 2004 Jack stopped his old ways and stopped drinking. He had been consuming alcohol since he was a teen. Jack had two drunk driving convictions, two convictions for public intoxication, criminal mischief, and underage probation charges.

The two began their jail ministry in 2004 with Darius Dustin at the Lawrence County Jail in Bedford. They shared their stories from their past lives and their new life with Christ. Jack was visiting inmates at the Pendleton Penitentiary.

Greene County Ministry started in 2007. They met normally on Monday evenings around 7 p.m.

Last night they opened with prayer and then a few inmates shared their stories and how God has helped them while in jail.

Tom Jacobs then read from 2 Kings 2:19 talking of the city where the water was naught – meaning bad, evil, rotten and worthless and the land was barren -being unfruitful, or unproductive. However, the salt was added to the water and it was no longer that way. Tom shared how each and every one of them has the potential to be productive again. But, they need to come to repentance.

Tom went on to say how the heart is deceitful but they can change their hearts through repentance.

Following the meeting, they asked if any wanted to commit to Christ. Two responded to the call and another said he was interested.

The twelve inmates on Monday evening was an engaging group of individuals who shared their experiences with Tom and Jack. After the meeting they returned back to their cell blocks, shaking hands with Jack and Tom as they said goodbye.

WBIW would like to thank Greene County Sheriff Michael Hasler for allowing us to cover this ministry and have access to the inmates.