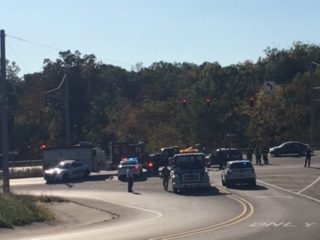 (BEDFORD) – Five people were injured in a traffic accident at State Road 37 and Patrick Robbins Way.

According to Bedford Police Department, Sharon Lake of Shoals was turning left onto State Road 37 from Patrick Robbins Way in a 2013 Chevrolet Equinox after disregarding the stop-light and collided with a 2003 Buick Century driven by Joe T. Shaffner of Orleans. Shaffber was traveling northbound on State Road 37.

Witnesses at the scene stated that traffic traveling northbound State Road 37 had the green light.

Both drivers and three passengers were complaining of injuries following the crash with four of the accident victims transported to the hospital.

Traffic traveling State Road 37 had to be diverted onto Patrick Robbins Way while the accident was being worked and cleaned up.