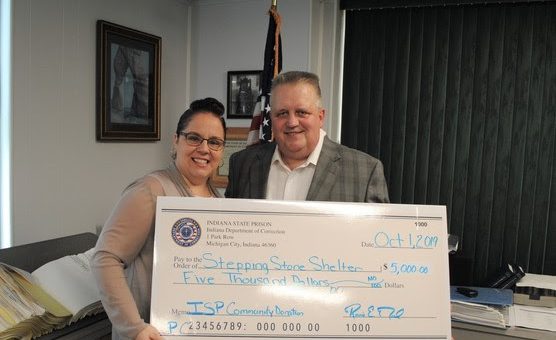 On October 1, 2019, the Indiana State Prison assisted the Stepping Stone Shelter for Women with a donation of $5000. Executive Director Nanda Danitschek accepted the donation from Warden Ron Neal.

Stepping Stone has a 24-hour shelter service for all victims of sexual assault/sexual violence, in addition to female victims. The shelter also has a transitional housing facility. Ms. Danitschek indicated they conduct education and outreach with an emphasis on prevention education, working in conjunction with the Indiana Coalition Against Domestic Violence.

Nearly three out of four Americans personally know someone who is or has been a victim of domestic violence. Now is time to take a stand. Support survivors and speak out against domestic violence all month long.

If you need assistance or want to talk to someone about domestic violence, call 1-866-331-9474 to speak with a trained peer advocate.