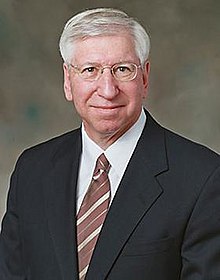 The Informatics buildings at the corner of 10th Street and Woodlawn Avenue now bear the name Myles Brand Hall.

IU President Michael McRobbie says the decision honors the passing of Brand 10 years ago this month and commemorates the 20th anniversary of the establishment of the then-School of Informatics.

“The driving force and visionary behind (the School’s) establishment was President Myles Brand, and I had the honor to work with him on it,” McRobbie said. “He saw clearly that IU Bloomington had suffered from not having a strong presence in technology, which it had been denied. It meant that there were fewer avenues for finding ways to apply and make practical use of innovations coming from basic research. To him, informatics was a way to establish that presence.”

The Informatics East and West buildings were spread out across campus prior to 2003, when the SICE found a home in the Info West Building. The School expanded into the East building in 2008. The name change has been approved by the IU Board of Trustees.