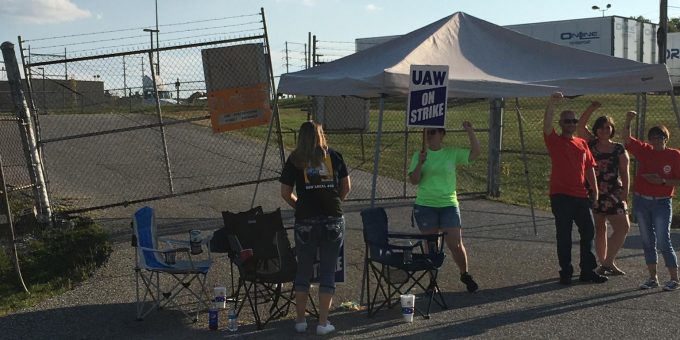 (BEDFORD) – Those passing the GM Powertrain today laid on their horns in sounding their support for those walking the picket line today.

United Auto Workers Local 440 President Kevin Hutchinson says workers are counting on the support of the Bedford community for the duration of the walkout.

For the first time in 12 years, Hutchinson and fellow union members in Bedford joined employees across the nation as they walked off the job at 11:59 p.m. Sunday.

Both sides are talking, but both sides are bracing for a long and costly fight. Workers are digging in on their fight for better wages, health care benefits and job security.

Industry analysts predict GM could weather a strike for two to three weeks before feeling a pinch in the marketplace.

The UAW has boosted its strike pay to $250 a week and told members to tighten their belts.

Union members say the bottom line is GM has been extremely profitable for a long time. Those profits were made off the sweat and hard work of union members and they want a fair agreement.

Striking workers said they surrendered financial benefits and job protection to help GM survive bankruptcy a decade ago. Now that the company is making profits they say its time they share. GM made $8 billion last year and made $27.5 billion in profits over the last four years of the current contract.

“Including temporary workers made full time with benefits,” says Hutchinson.

Hutchinson says many of their “temporary” employees have been working at the plant for years, making less money and having none of the benefits as the person working next to them.

There are 65 temporary employees at GM Powertrain.

This issue is about their pay, benefits, worker safety, health care, and quality of life.

The union also wants new products for the four factories GM wants to close. The factory plans have irked some workers, although most of those who were laid off will get jobs at other GM factories. GM currently has too much U.S. factory capacity.

The companies want to close the labor cost gap with workers at plants run by foreign automakers. GM’s gap is the largest at $13 per hour, followed by Ford at $11 and Fiat Chrysler at $5, according to figures from the Center for Automotive Research. GM pays $63 per hour in wages and benefits compared with $50 at the foreign-owned factories.

Union members have great health insurance plans, but workers pay about 4% of the cost. Employees of large firms nationwide pay about 34%, according to the Kaiser Family Foundation. The companies would like to cut costs.