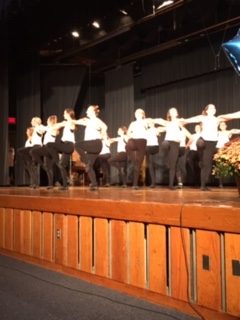 (MITCHELL) – It was an evening full of fun, laughter, and good times for everyone at this year’s “Dancing With The Stingerz”. This marks the second year for the event which raises money for the Mitchell High School Dance Team.

This year’s fundraiser will help the group attend the NDA National’s in March of next year, in Orlando, Florida.

“I am pleased to officially announce publicly the group will not have to pay out of pocket for this year’s Nationals,” Michelle Zehr announced last night at the conclusion of the event.

It was an exciting, fun thrilling adventure for the dancers, their partners, and the crowd as the watched professional and some not-so-professional dance moves.

Contestants were judged on their dance routine, costume, choreography, and appearance – just to name a few categories.

Cassie England and Amaya Premo got the crowd participating in their routine with clapping and cheers.

Dusty Modglin was a crowd pleaser with his lifts and costume pants, according to the judges.

Mike Hopper was told he had a new line in marketing for his insurance company – “The Rapping, Insurance Agent.”

Kim Earl and Hayden Dersch was another routine that excited the crowd.

This year’s dancers in order of performance include:

The judges said picking a winner was tough because it was a close competition. Placing first was Bryan Fountain and partner Lauren Hudson. Placing second was Dr. Wilcox and Abby Briscoe with Kim Earl and Hayden Dersch taking third place.

The judges for this year’s event included Elizabeth Hathaway, Cassie Wheatley, Senora Jenifer Allen. The emcee for the event was Vicky Schlegal.

“We want to thank the community for their support of our group, ” said Michelle Zehr Manager of the Mitchell Dance Team.

The Mitchell Junior High School Spaghetti Dinner raised more than $2,210.25, which was held prior to the “Dancing With The Stinerz” event in the Mitchell High School Auditorium.

The Mitchell High School Dance Team have been very competitive over the year’s winning at the State Level :