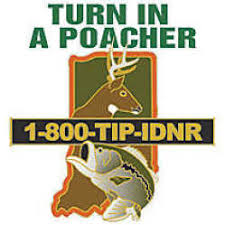 VanBritson and Hoss have entered into an informal deferral program through the Vanderburgh County Superior Court on April 26, 2019.  He received a two-year revocation of hunting privileges, was ordered to attend a Hunter Education Course, received 24 hours of community service, VanBritson forfeited the rifle and Hoss his bow used to take the deer. In addition to court-ordered fines and penalties, each were ordered to pay a $500 replacement fee to the DNR for the illegally taken deer.

Indiana Conservation Officers received an anonymous tip on Oct. 31, 2018, that a white-tailed deer had been illegally taken in Vanderburgh County the previous day near the Thunderbolt Pass Golf Course in Evansville.

Indiana Conservation Officers Keith Wildeman and Matt Porter responded to conduct surveillance of the area. After several hours, VanBritson and Hoss arrived to retrieve the illegally taken deer, and the officers apprehended them in the act.

Investigators determined that VanBritson shot an eight-point buck using a .270 caliber rifle on the previous day after legal hunting hours.

VanBritson told the officers he shot the deer as it was standing in a bean field on the north side of Petersburg Road across from the golf course.

VanBritson who was in his vehicle waited for a break in traffic, stood up through the sunroof of his vehicle and shot across the roadway with his high-powered rifle.

VanBritson and Hoss returned the next morning and located the wounded buck. VanBritson then shot and killed it with a bow and arrow. The men then left the scene, intending to return after dark to retrieve the deer.

In a separate and unrelated incident in January 2018, VanBritson and Hoss were charged with hunting without landowner consent and illegal possession of a white-tailed deer in Posey County.