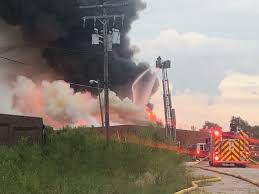 (TERRE HAUTE) — Authorities say two teenagers are suspected in a fire that swept a vacant warehouse complex in western Indiana nearly four months after another blaze damaged the same site.

No injuries were reported in the fire near Terre Haute’s Coy Park.

Terre Haute firefighters who were called to the warehouses on the city’s north side around sunset Sunday battled flames as a large plume of smoke rose from the complex.

Arson had been suspected.

Fire crews responded to a fire at the same complex on April 28. Investigators say they don’t believe the teens are responsible for that fire.