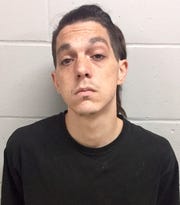 (WASHINGTON) – A child has died and the Washington man held responsible is now behind bars.

Police say he was the caretaker of one-month-old Kyson Jones of Loogootee.

The baby was initially transported to the Daviess County Hospital and then taken to Riley Children’s Hospital in Indianapolis via a helicopter. On Friday, Kyson was removed from life support and died.

Leighty was initially charged with neglect causing serious bodily injury. State Police said through their investigation they will present additional evidence to the Martin County Prosecutor’s Office to amend his charge to neglect resulting in death.