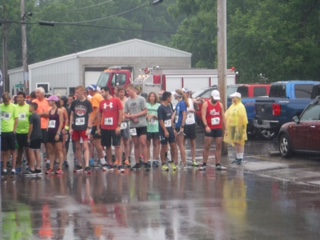 (SPRINGVILLE) – The rain did not dampen the 15th year of Springville’s 5K on Saturday morning.

This year, Springville did not have a festival but continued with its 5K Run to help with operational costs of the Community Center and Park.

The fundraiser is used to help the community keep the park and the community center maintained and in working order. It costs around $100-150 a month to keep the lawns and complete other maintenance projects. Fundraising will also aid in future projects and needs.

The Community Park was established in 2004 to give residents a place to walk, have family reunions, use playground equipment, play horse-shoe games, and use the park benches lining the walkway for people to use throughout the park.

In July of 2016, an arson fire destroyed the gym and damaged the nearby shelter house. Fundraisers have raised enough money to be able to enclose the gym.

“We have enough money now to enclose the gym by putting in roofs, windows, and doors. All we are waiting on right now is approvals of some permits to complete this part of the project,” stated Dennis Godsey. “We were hoping to have the project completed by this spring. However, we are now hoping by this fall to have construction underway. We are just waiting on approvals.”

Approximately 50 runners turned out despite the rain. Several of the runners where regulars who have attended from 8-15 years of them having the event. Valarie Oloughlin stated this is her eighth year of attending the Springville event.

“I have lived all my life in Bedford, and this is my first year at the Springville 5K. It was a nice course and enjoyed it,” said Payton Orender. Orender was the first to cross the finish line in 18 minutes and 59 seconds.

The runners also signed a Get Well card for Springville resident Larry Hamersley who was struck by a vehicle in Bedford on Tuesday. Hammersley, 81, has been a part of these races for more than 35 years and was missed at this weekend’s event.