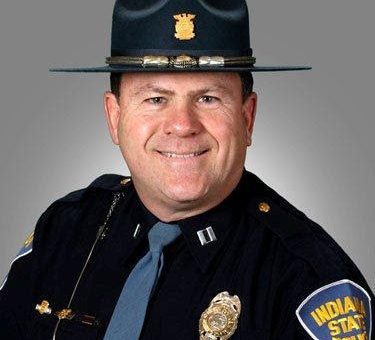 (INDIANAPOLIS) – A longtime spokesperson for the Indiana State Police, Capt. David Bursten, retired today, June 14, 2019.  Though retired from the state police, his service to the State of Indiana will continue with the Indiana Department of Correction (IDOC) where he will serve as the Chief Communications Officer.  He starts this chapter of public service on June 17th that will include management of internal and external communication of activities of interest at IDOC facilities located across Indiana.

Dave Bursten’s 41 year law enforcement career started in the late nineteen seventies with service as a military police officer in the United States Army, and as a city police officer in Santa Monica, California.  This June marked his 36th and final year with the Indiana State Police where his assignments included road patrol duties as a trooper, with future assignments to the security detail for the late Governor Robert D. Orr and service in the training division of the state police.

The Public Information Officer (PIO) service of retired Capt. Bursten’s career began in 1995 as a Trooper PIO for the Indianapolis State Police Post, located on the east side of Indianapolis.  In 1996 he was promoted to the rank of Sergeant and continued his service as a PIO for the Indianapolis Post.  In 1998 he was promoted to the rank of First Sergeant and was responsible for supervision of public information officers assigned across Indiana and regularly interacted with media representatives throughout Indiana. He has conducted hundreds of on-camera media interviews, both taped and live, as well as hundreds more of radio and print media interviews recapping actions of the state police at critical events.  One of the notable events where he was in charge of all aspects of media interaction was the August 2011 Indiana State Fair stage collapse that resulted in the loss of seven lives and the closing of the state fair for 24 hours.

In October of 2011 David was appointed to the rank of Captain to serve as the Chief Public Information Officer for the Indiana State Police and reported directly to the Superintendent and Chief of Staff of the state police.  In this position, which he held until his retirement, he provided guidance and direction as needed for media response to critical events where the Indiana State Police was a lead or assisting investigating agency.

When asked about his service with the state police as the agencies Chief PIO, David said, “The first thing I’ll tell you is I couldn’t have been successful without the support of my wife and son.  Now specific to my duties, all I did was try to serve as a sounding board and mentor to the 13 Field PIO’s assigned to each state police post.  The Field PIO’s are the “face” of the Indiana State Police in their local communities and have done – and will continue to do – an excellent job informing the community about meaningful activities of the state police.”

Bursten continued, “The key point I always stressed was the importance of sharing with media and the public all the information for which they have the legal right to know while understanding that doesn’t necessarily mean telling media everything they want to know.”

Bursten concluded, “It’s hard, to sum up, a 36-year career in a couple of sentences.  That said, I can tell you I’ve been overwhelmed and humbled by the number of people within the state police, and so many from other police agencies, as well as from outside law enforcement, who have thanked me for my service and shared personal stories of how I impacted their lives in a positive manner.  It’s so true when you love what you do, it doesn’t seem like work.  I had a great career with the state police and now I’m setting my sites on how I can be of service to the Indiana Dept. of Correction.”

David will maintain his membership with the Indianapolis Public Relations Society (IPRS) as well as with the National Information Officers Association (NIOA).  David and his wife, Beatrice, will continue to reside in Indianapolis with their son, Konrad, who will be starting his junior year at Purdue University.

Recently promoted F/Sgt. Ron Galaviz is assuming the duties and responsibilities of retired Capt. Bursten.  F/Sgt. Galaviz may be contacted by email at rgalaviz@isp.in.gov or by phone at 317-232-0064.