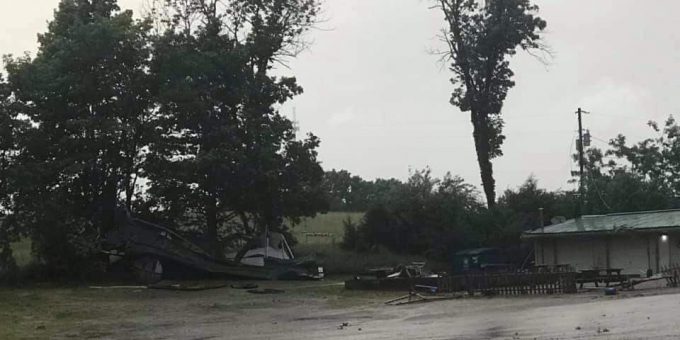 (RIDGEPORT) – The Center-Jackson Fire Territory responded to a possible tornado touchdown in the area of Indiana State Road 54 and Crowe Road in eastern Greene County on Saturday.

While the department was responding to the area they found numerous trees and homes damaged from Eastern Greene Elementary School to Crowe Road.

Firefighters performed a primary search of the area for injuries and other emergencies. No injuries were reported. They did find that a natural gas main broke near the intersection of Indiana State Road 445/45. Firefighters evacuated the area until the gas main could be fixed.

Officials request for people to avoid the area while emergency crews continue to work and clean up from the storm damage. If there are other areas that have damage you are encouraged to contact emergency officials.

A shelter was opened at the Center Township Fire Station on State Road 54 between State Road 45 and State Road 445 for storm victims and remains open for those needing a place to stay. The department can be contacted at (812) 825-2799.

Utilities District of Western Indiana reported that there was damage to transmission lines at the Freeman Substation. This feeds into Whitehall, Newark, and the New Hope area and will take a little time to get restored.