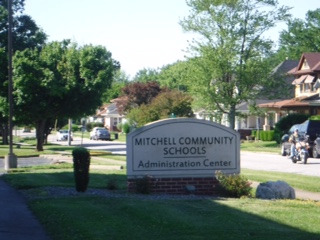 (MITCHELL) – The Mitchell School Board approved the hiring of six new teachers for the 2019-2020 school years.

The board received updates on the storm damage that hit Mitchell during last weekend’s thunderstorm. Dr. Wilcox reported that it could have been much worse and was spared major damage.

At the Burris Elementary School a tree was blown down, hitting a basketball goal, and landing in between the two buildings.

Dr. Wilcox reporting, that work is set to begin on June 24th at the Administration Building.

The board will be re-advertising bids for fuel; the advertisements will be made on June 12th and June 19th. No one placed bids when it was advertised the first time. The two companies that normally bid, did not turn one in. The bids will be opened on June 26th, at 10 a.m. and presented to the board at the July meeting.

Bus route #16 was approved a Retroactive Contract for mileage reimbursement due to the road construction on State Road 37. This is the only contract bus route affected so far by the construction.

Dr. Wilcox wanted to thank those who worked on the mission statement and strategic plan for the corporation. Signs located near Mitchell on the North, South, East and West Parts of Mitchell were put up recently and there was positive feedback from the display. The Administrative Cabinet will continue to work on the plan.