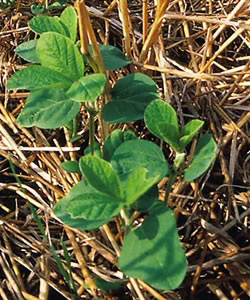 (INDIANAPOLIS) — According to a recent survey, Indiana farmers planted more than 1 million acres of cover crops in 2018, up 32,000 acres from the previous year.

Cover crops are known for their environmental benefits and, with the exception of corn and soybeans, are planted on more acres than any other commodity crop in Indiana. They are typically planted in the fall after harvest and designed to keep roots in the ground throughout the winter, which improves soil health and helps filter water off of the farm.

As a result of the cover crops planted last year, it is estimated that 1.3 million tons of sediment was kept out of Indiana’s waterways, along with 3.2 million pounds of nitrogen and 1.6 million pounds of phosphorus. That’s enough sediment to fill more than 350 Olympic-size swimming pools.

This visual survey comes on the heels of the recently released 2017 USDA Census of Agriculture, which indicated that farm conservation is on the rise in the U.S.

The census revealed that, in addition to more cover crops planted, Indiana farmers also shifted nearly 1 million acres from conventional tillage to conservation tillage, up 33% from the last time the census was conducted in 2012.

“If you look at where we were a decade ago, major progress has been made,” said Indiana State Department of Agriculture Director Bruce Kettler. “Farmers are investing more in conservation, which is particularly significant considering where the farm economy has been for the past five years.”

One of those farmers is Mark Anson of Knox County. Anson and his family farm nearly 20,000 acres in southern Indiana and Illinois, and have been incorporating cover crops as part of their management since 2010.

“These past two fall seasons have been difficult to get our cover crops planted because of rain and then the cold weather really limited their growth for us and many other farmers,” Anson said. “But, I’ve seen many benefits in using cover crops on my farm over the past 10 years, so I’m going to continue on the path of healthy soils conservation systems because it is an investment in improving our environment.”

The cover crop transect is a visual survey of cropland in the state. It’s conducted every year in the fall by members of the Indiana Conservation Partnership, including the USDA Natural Resources Conservation Service, the Indiana State Department of Agriculture, Indiana’s Soil and Water Conservation Districts and Purdue Extension, as well as Earth Team volunteers, to show a more complete story of the state’s conservation efforts.

Click here or visit www.isda.in.gov to see the results from the survey.#