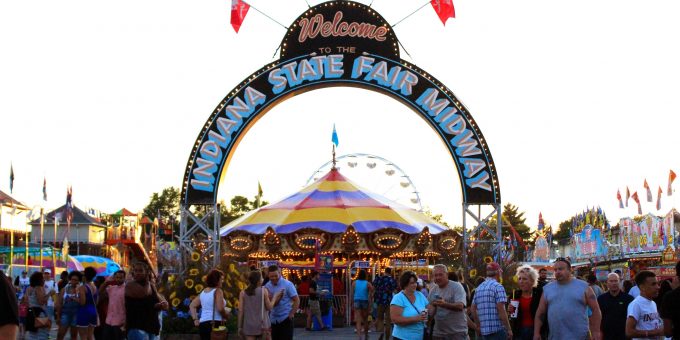 (INDIANAPOLIS) – The Indiana State Fair announces the first six of 17 concerts that will be part of the 2019 Indiana State Fair Free Stage headline entertainment, which returns August 2-18. Each night of the Fair features a concert that is free with paid fair admission.

Advance discount tickets (a savings of 38% off gate prices) are $8, plus a $1 convenience fee. Children 5 and under are free. To purchase tickets, visit IndianaStateFair.com. Tickets can be purchased at the Indiana Farmers Coliseum Box Office during business hours at the discounted rate. Tickets purchased at the gate are $13. Check IndianaStateFair.com for additional promotions available throughout the summer. Purchase of an Indiana State Fair tickets allows for general admission to the Free Stage concert seating area. No seats can be reserved unless otherwise specified.

Ace Frehley, original guitarist and co-founder of KISS, has an impressively expansive career that shows no sign of stopping. Known for his impressive and distinctive guitar solos and flashy stage presence, Frehley was a key figure in the early success of KISS, co-writing some of their biggest hits, including “Cold Gin”, “Shock Me” and “Rocket Ride”. Apart from KISS, Frehley has proven himself successful on his own. His first solo album, “Ace Frehley” was released in 1978 and was certified platinum. The album featured the hit single, “New York Groove”, which peaked at 13 on the US Billboard Hot 100 chart. A man of many talents, in 2011 Frehley released his autobiography, “No Regrets- A Rock and Roll Memoir”, which was received with great critical acclaim and became a New York Times Best-Seller. Frehley’s latest release, “Spaceman”, an album named after his long-standing stage persona, was released in 2018. As a quintessential rock performer and showman, Frehley continues to tour extensively around the globe.

Country music maverick Chase Rice has become one of country music’s most exciting figures since arriving in Nashville, building a loyal fan base across the country through his energetic live shows and gaining the attention of music critics and industry professionals alike with his edgy, eclectic sound. The Tar Heel State native released his sophomore album, Lambs & Lions, featuring lead single and Top-20 hit “Three Chords & the Truth,” with new label Broken Bow Records in November 2017. Follow-up single and two-week chart-topper “Eyes On You” has not only become the most-streamed song of Rice’s career with more than 130 million streams and counting, it also marked his first No. 1 as an artist at Country radio and remained atop the charts for two weeks. Lambs & Lions followed Ignite the Night, which debuted at No. 1 on Billboard’s Top Country Albums and No. 3 on the all-genre chart, producing a pair of Top 5 hits; the Platinum-certified “Ready Set Roll” and “Gonna Wanna Tonight.” After supporting Kenny Chesney’s The Big Revival Tour, Rice consistently sold out 2,500-3,000 seat venues on his headlining JD and Jesus Tour, Everybody We Know Does Tour and Lambs & Lions Tour. He recently served as direct support on the Luke Bryan Farm Tour 2018 and headlined the U.K. run in advance of his highly-anticipated Eyes On You Tour, currently underway.

The Pop 2000 Tour hosted by Lance Bass of *NSYNC, is the ultimate early 2000s throwback, featuring performances from fan-favorite platinum selling POP2K artists O-Town, Aaron Carter, Ryan Cabrera, and Tyler Hilton. Bass, a man of many talents and a household name around the globe, is best known as a member of the group *NSYNC, which sold over 60 million records worldwide. O-Town’s success began when the group was featured on, “Making The Band”. The show chronicled their rise to fame with hits including “Liquid Dreams” and “All or Nothing”. Multi-platinum selling artist, Aaron Carter, is well known for hits such as “I Want Candy” and “Aaron’s Party (Come Get It)” and appearances on popular TV shows, including “Dancing With The Stars”. As the singer and songwriter of several early 2000s hit, such as “On The Way Down”, “True”, and “Shine On”, Ryan Cabrera was also featured frequently on MTV’s “The Hills” and “Ashlee Simpson Show”. Tyler Hilton, Known best by fans as Chris Keller on hit CW series, “One Tree Hill”, found musical success when his versions of “Missing You” and “When The Stars Go Blue” on the show’s soundtrack reached platinum status.

Melissa Etheridge is one of rock music’s great female icons. Her critically acclaimed eponymous debut album was certified double platinum. Etheridge’s popularity built around such memorable songs as “Bring Me Some Water,” “No Souvenirs” and “Ain’t It Heavy” for which she won her first Grammy for Best Female Rock Vocal. Etheridge hit her commercial and artistic stride with her fourth album, Yes I Am, featuring the massive hits “I’m the Only One” and “Come to My Window,” a searing song of longing that brought her a second Grammy. The six times platinum album spent more than two and a half years on the album chart. Etheridge is also an Oscar winner for Best Original Song in 2007. In 2011 Melissa made her Broadway debut as St. Jimmy in Green Day’s rock opera, American Idiot, where she replaced Billie Joe Armstrong for one week and received a star on the Hollywood Walk of Fame. Etheridge is scheduled to release Memphis Rock and Soul, a new album honoring Stax Records, in fall of 2016. She recently completed recording at Royal Studios in Memphis on what will be her first album since 2014’s critically lauded This Is M.E.

On June 20, 2016, Etheridge released a song called “Pulse.” The singer wrote the song in reaction to the mass shootings that took place in Orlando on June 12, 2016. As she told Rolling Stone, “We want to try to make sense. We want to try to heal. We want to bring some meaning, some purpose. We also want to put it down forever in history. That’s how I’m coping.” All proceeds from the sale of “Pulse” will benefit Equality Florida, the states largest LGBT civil rights organization.

On April 12, 2019, Etheridge released her highly anticipated new album, “The Medicine Show”. She was featured on CBS This Morning on April 15 discussing her career and new music.

Everclear, a ’90s alt-rock group consisting of Art Alexakis (vocals, guitar), Dave French (guitar), Freddy Herrera (bass), Brian Nolan (drums), formed in 1991 in Portland, Oregon and have an impressive list of accomplishments including a 1998 Grammy nomination. Although their most recent album, “Black Is The New Black”, was released in 2015, the band tours extensively and takes full advantage of their large backlog of hits, as well as their more obscure tracks. By pulling material from albums such as “Afterglow”, “Sparkle”, “Fade”, “Songs From The American Movie” and “Invisible Stars”, the group seeks to keep their live act fresh yet familiar to please an array of fans. Alexakis says, “Even though I recorded some of those songs 20 years ago, I haven’t played them in a long time, so it’s like reinventing the wheel. I’m having more fun now than I have in years. I think all of us are.”

Sisters Erica and Tina Campbell are a Gospel duo better known as Mary Mary. Together, they star in the WE hit reality TV series, “Mary Mary” and have received numerous accolades, including four Grammy Awards, three NAACP Image Awards, two American Music Awards, a Soul Train Award, a BET award, and several more. Their first smash hit came in 2000 with “Shackles (Praise You)”. Over time, Mary Mary has sold over 5 million albums, toured around the world and served as a gateway to successful solo careers for both sisters. Erica and Tina have each released award-winning solo albums and have found themselves as hosts, entrepreneurs, influencers, and authors in addition to devoting time to their faith and families as loving wives and mothers.

About the Indiana State Fair

The Indiana State Fair is the state’s largest multi-day event celebrating Hoosiers’ spirit and agricultural heritage. These 17 days celebrate Indiana agriculture and promote it to hundreds of thousands of people across Indiana, and beyond. Nationally recognized for offering great entertainment, showcasing youth, interactive agriculture education programs, premier facilities and a variety of unique, fun foods, the Indiana State Fair has been an annual attraction for generations of Hoosiers since 1852. The 2019 Indiana State Fair will be held August 2-18. To pay tribute to the heroism of everyday Hoosiers, this year’s Indiana State Fair theme is HEROES IN THE HEARTLAND presented by Indiana Donor Network. Throughout the 17-day event, the Indiana State Fair will salute Hoosier farmers, first responders, educators, members of the Armed Forces, and many others who keep us safe and make us proud. Additionally, each day during the fair, Marvel Character and DC Comics Superheroes will be highlighted. For more information, visit www.indianastatefair.com.