(INDIANAPOLIS) – Gov. Eric Holcomb ceremonially signed Senate Enrolled Act 551 on Wednesday in the Statehouse with the bill’s author and sponsor, prosecutors and two constituents all in attendance. 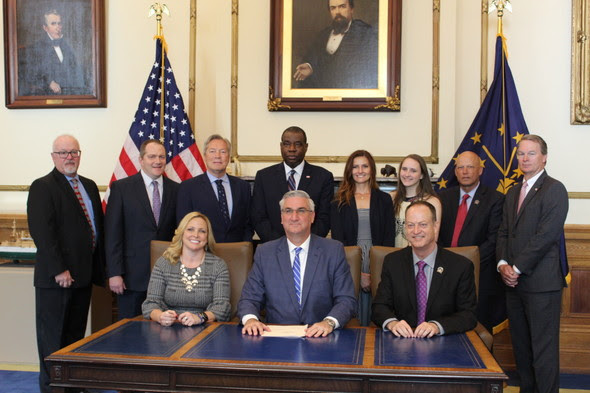 SEA 551, authored by Sen. Mark Messmer, R-Jasper, and sponsored in the House by Rep. Wendy McNamara, R-Evansville, is a victims’ rights bill that addresses several important areas in the criminal justice world dealing with crime victims. The bill started when a constituent reached out to Sen. Messmer for help with a man who was grooming her 14-year-old daughter. Because no physical act had occurred, the mother was unable to file a restraining order. Sen. Messmer, with the help of county prosecutors, crafted language to put a stop to that type of behavior by allowing restraining orders against people who are making inappropriate contact with minors.
“I am very pleased to see this legislation signed into law,” Messmer said. “SEA 551 will impact every Hoosier community by improving how we support victims as well as ensuring offenders are justly penalized for their actions.”
SEA 551 contains several other provisions geared towards helping the victims of crimes, including adding confidentiality provisions for victims in court documents, barring the release of Department of Child Services reports during an ongoing criminal investigation, enhancing penalties on repeat strangulation offenders and allowing victims access to an emotional support animal or comfort item while testifying in court.
The bill also addresses a gap in the current kidnapping and criminal confinement laws by creating an offense when the kidnapping or criminal confinement results in moderate bodily injuring to the victim. The legislation does away with the current practice of offenders having the opportunity to have their felony domestic battery conviction reduced to a misdemeanor.
“To better protect domestic violence and child victims from their abusers, this new law will expand their privacy rights and ensure offenders are appropriately punished for their crimes,” McNamara said. “Victims need to know that they are safe and have support, and this law will take steps to protect their physical and emotional health.”
Prosecutors Bernard Carter, Lake County; Rodney Cummings, Madison County; and Patrick Harrington, Tippecanoe County, were all in attendance for the signing, along with IPAC Executive Director David Powell and Assistant Executive Director Chris Naylor.
“We are thankful for all the hard work that went into this important bill,” said Powell. “We think this will be very impactful for the victims of crimes throughout Indiana.”
The bill enjoyed broad bi-partisan support as it made its way through the legislature, it passed the Senate unanimously and moved out of the House with a vote of 92-4. The provision barring the disclosure of DCS reports has already become law, the rest of the bill will take effect on July 1, 2019