Galaviz is a native of Bay City, Michigan and a 1988 graduate of the former Bay City Handy High School. In December of 1992, he earned a Bachelor Degree in Criminal Justice with a minor in Psychology from Michigan State University. 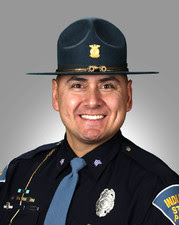 On December 20, 1993, Galaviz graduated from the 50th Indiana State Police Recruit Academy and was assigned to the Fort Wayne Post. Galaviz patrolled Noble and LaGrange Counties until June of 2008 when he was promoted to the rank of Sergeant and served as the Fort Wayne District Public Information Officer until this recent promotion.
During his career, Galaviz has served as a member of the Tactical Intervention Platoon, a Field Training Officer, Applicant Background Investigator, Technical Crash Investigator and was one of the original trainers for the Department’s new electronic ticket program which was implemented in the mid-2000’s. He was the recipient of the Department’s Silver Star Award for his life-saving efforts in August of 2004 and he graduated from the Indianapolis Metropolitan Police Department Leadership Academy in November of 2015.
Galaviz and his wife, currently residents of Noble County, have an adult daughter who is a resident of Marion County and an adult son who will be a junior at Indiana University in Bloomington.
The Indiana State Police’s soon to retire Chief Public Information Office, Capt. David Bursten, commented, “First Sergeant Galaviz is a seasoned and professional PIO with more than 10 years of service meeting media needs about state police activities in the greater Ft. Wayne and northeastern Indiana area.” Bursten continued, “I have the utmost confidence in Ron and know he will continue the practice of providing the media and public with information that is confirmed and accurate.”