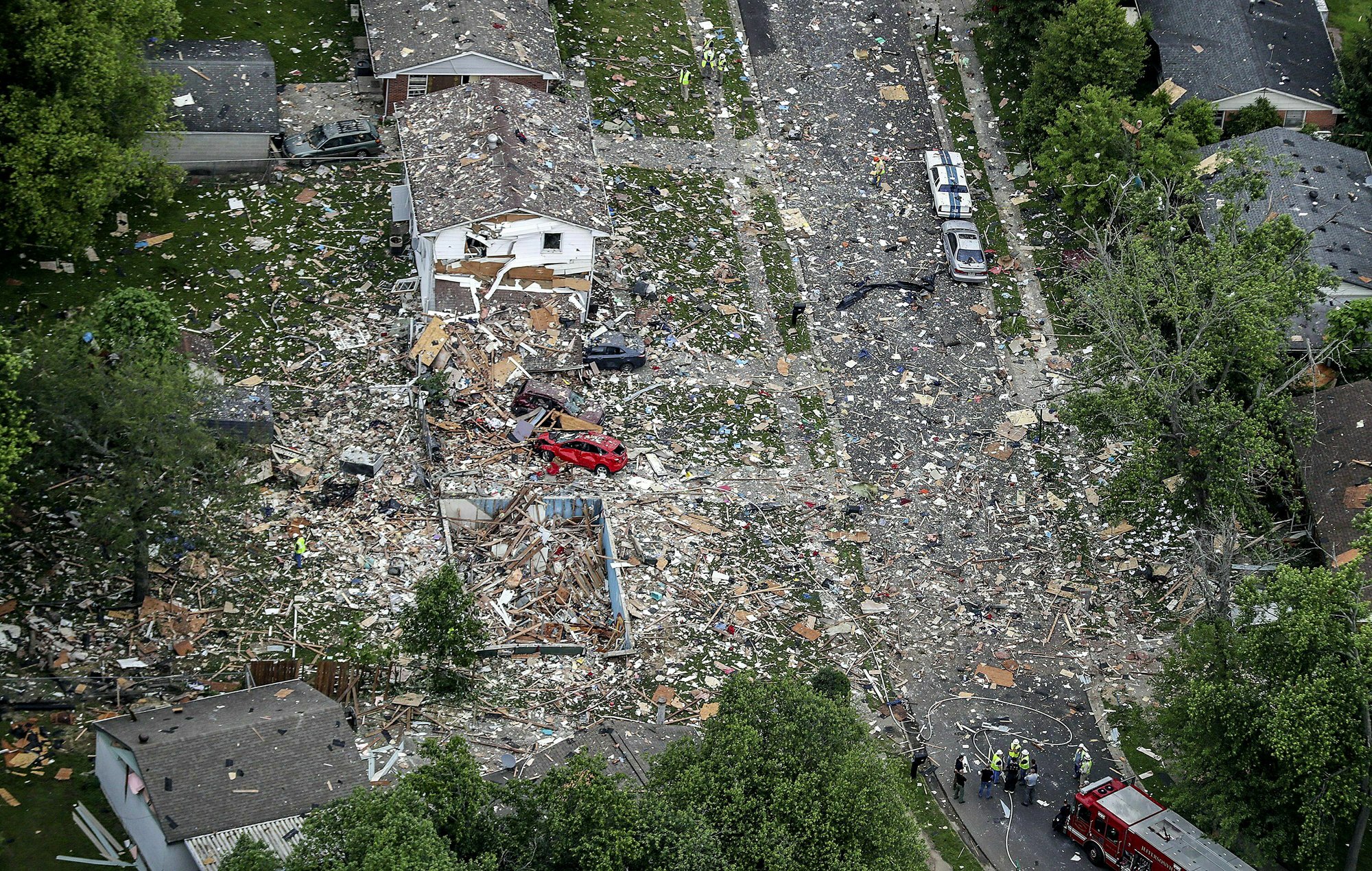 This aerial photo shows the scene of a deadly home explosion in Jeffersonville, Ind., on Sunday, May 19, 2019. (Michael Clevegner/Courier Journal via AP)
Hours after the explosion shattered windows across a Jeffersonville neighborhood and sent debris flying onto roofs, lawns, and cars, officials had not said what they believe caused the explosion.
Indiana State Police, Jeffersonville police and firefighters were at the scene, along with crews from Vectren, a natural gas provider.
Jeffersonville police Lt. Isaac Parker told The Courier-Journal that the house exploded just before 5 a.m. Sunday in the Ohio River city just north of Louisville, Kentucky. He said one person was killed and two others were hospitalized with serious injuries.
Officials haven’t said if the victims were inside the house that exploded. Aerial footage showed the home’s foundation and what appears to be its basement, covered with debris.
The images were reminiscent of photos following a house explosion in an Indianapolis neighborhood in December 2012 that killed two people and damaged or destroyed more than 80 homes. Authorities concluded that Mark Leonard had tampered with a gas line to blow up his girlfriend’s home so they could claim insurance money.
Leonard died in prison last year.
Sgt. Jason Ames with the Jeffersonville Fire Department said the explosion Sunday had affected about 20 homes in the Capitol Hills neighborhood. He said it was felt up to 5 miles (8 kilometers) away and that the house where it occurred suffered “catastrophic” damage.
Ames did not immediately return a phone message seeking additional details.
Fire Chief Eric Hedrick said the house where the blast occurred was largely destroyed and five to six nearby homes were left uninhabitable due to damage.
William Short, who lives across the street from the house that exploded, said he was in bed when he heard the explosion.
He said he looked outside and saw what appeared to be fireworks before a second blast shattered his windows, blew off his front door and cracked his ceilings. Short looked outside again and saw from the light of a burning car that his neighbor’s home was gone.
“You don’t never think you’re going to wake up and see your neighbor’s house completely gone,” he told The Courier-Journal.