(BEDFORD) – If you’ve never attended the Ugly Duck Derby, you are missing a great day of family fun that’s all for a great cause. As the community gathered around the John Lowery Municipal Pool, Emcee Steve Warren opened the 7th Annual Ugly Duck Derby this past Saturday.

Some of the crowd enjoying Saturday’s event.
The first round of the Belly Buster Contest kicked off the Saturday’s festivities. All belly floppers were geared and ready to compete in costumes.

Batman, Daniel Sipes, and Super Man Bedford Police Capt. Morgan Lee were two of the fan favorites.
Daniel Sipes was awarded a bye for the first round for raising the most money. Bill Decker took the lead with 26 points at the end of the first round. The top four scoring contestants at the end of the second round would then compete for the champion title in the third round. Those that advanced to the final round were: Morgan Lee, Marla Jones, Bill Decker, and the Mystery Masked Flopper; who dawned a face mask and a BNL wrestling unitard.

The judges; Frank Decker, Murphy in the Morning and Gena West, actually scored a tie at the end of the third round. Marla Jones and Morgan Lee engaged in another round with some friendly competition. Emcee Steve Warren reminded the crowd that “pain is temporary, but victory is forever” as Morgan Lee began to take his last leap in the air. In the end, Bedford Police Capt. Morgan Lee took home the victory. 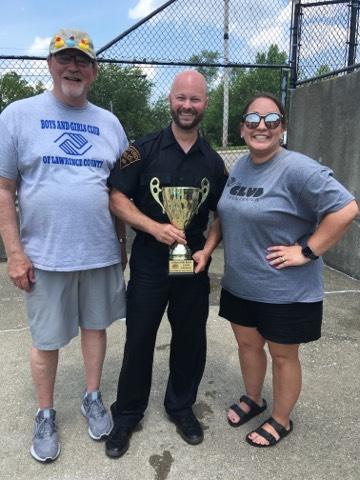 The Belly Flop Contest is only one of the activities to occur at the event. One of the most notable event attractions is the 10,000 duck race. Roger Gales called the 10,000 yellow ducks, playing his bugle from the top of the slide. The ducks were released, and the crowd anxiously awaited to see which duck would cross the finish line first.

Thousands of ducks
Dianna Edwards bought the lucky duck #9492, which won her a two-year lease to an F150 pickup truck provided by Bedford Ford or she can opt to take a cash prize value of $4000.00. But there’s more than just one winner at duck derby. See below for all prize winners to this race. You can claim your prize beginning Monday at the club between the hours of 10 a.m. until 5 p.m. at the Club.
The Winners are:

New this year, Dustin Halton, a fifth-grader at Parkview Intermediate, participated in the rock wall climbing contest. When asked what advice he had to give those who may compete in the competition next year, he stated, “You’ll need good finger strength.”

Winner of the rock wall climbing contest – Dustin Halston, of Parkview Intermediate.
Finally, the last event feature was the 100 duck race. This race has only 100 blue ducks, and that winning duck will bring it’s owner $2500. Ryan Sullivan, a board member, and longtime club supporter had that winning duck. He graciously donated his winnings back to the Lawrence County Boys and Girls Club. Dr. Mackey also gave his winnings back to the Club.
Lawrence County Boys and Girls Club Board Member, Holly Davis, has assisted with the planning of the event and ticket sales for several years. Each year, she says it is the club’s goal to sell all 10,000 ducks.
“Our community is so blessed to have a facility like the Lawrence County Boys and Girls Club,” Holly said.
Although the club did not quite reach their goal his year, she said, Lawrence County is a very giving community and it excited her to see the vast public support for this much-needed fundraiser.
The Lawrence County Boys and Girls Club wants to give full recognition to the Parks Department for allowing the club to use the pool for their event.
“Not only do they allow us the use of the pool and staff resources, but Amber McIntyre and Jordan Webb are an essential element to the success of this major fundraiser,” said Timber Browning, Resource Development and Marketing Director.
Amber and Jordan take part in the planning meetings and help facilitate this event.
“Without them, we could not do this event to this level,” Timber added.
Several lifeguards assisted Saturday with the corralling of the ducks. The club would like to thank Pool Manager Sidney Faubion, Assistant Manager Alec Chastain and fellow lifeguards Dayson Sorrells, Sidney Carlisle, Isaac Williams, Dain Endris and Cooper Holmes for their much-needed help.

Lifeguards lending a hand with the ducks
Director Frank Decker steers the Lawrence County Boys and Girls Club. This is his first behind the scenes experience with the Ugly Duck Derby Race.

Boys & Girls Club of Lawrence County Director Frank Deckard rocks his duck hat.
He and the board members express their gratitude to Timber Browning, Resource Development and Marketing Director for leading this fundraiser and all the clubs fundraisers to such heights of success. A special thanks to Jimmy Sowders for his years of service, passion, and support to the community youth and the Lawrence County Boys and Girls Club.