(CLARKSVILLE) – A historic site in southern Indiana is now part of a new 1,200-mile (1,931-kilometer) expansion of the Lewis and Clark Historic Trail. 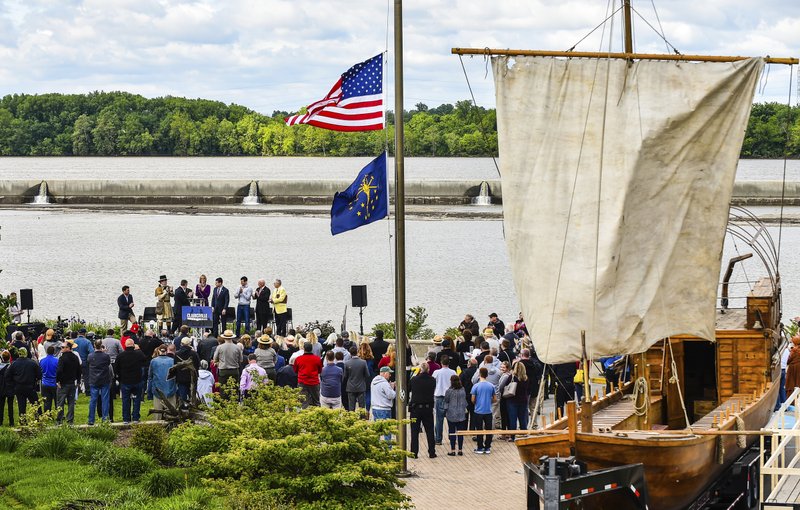 A replication keelboat rests beside the crowd for an announcement Monday, May 13, 2019, for the extension of the Lewis and Clark National Historic trail. A sprawling 4900 miles create the trail, which will now be joined by Southern Indiana stops along the way. (Tyler Stewart/News and Tribune via AP)
The News and Tribune reports national, state and local leaders gathered Monday at the Falls of the Ohio Interpretive Center in Clarksville to officially recognize the trail’s expansion. Sen. Todd Young, who sponsored legislation about the designation, called it “a magnificent day.”
The expanded recognition includes areas in Indiana, Kentucky, Ohio, Pennsylvania and West Virginia, and new portions of the trail in Illinois and Missouri.
The expedition across the western U.S. by explorers Meriwether Lewis and William Clark officially started in 1804, but Lewis and Clark met up a year earlier in Clarksville, Indiana, as they prepared for the journey. One new sign notes that meeting.
Information from: News and Tribune, Jeffersonville, Ind., http://www.newsandtribune.com