(INDIANAPOLIS) – The Indiana House has endorsed a Republican-backed state budget plan that would modestly boost school funding, although by much less than advocacy groups and Democrats say is needed to give teachers significant pay raises.

Tom Davies of the Associated Press reports school funding would increase by 2.1 percent the first year and 2.2 percent the second year of the new two-year state budget under the proposal approved Monday by a 65-32 party-line vote. Republican Gov. Eric Holcomb and GOP legislative leaders have touted the importance of addressing Indiana’s lagging teacher salaries, but Democrats argue their proposals are inadequate.
House Ways and Means Committee co-chairman Todd Huston of Fishers said the plan makes the right investments in education and other programs. 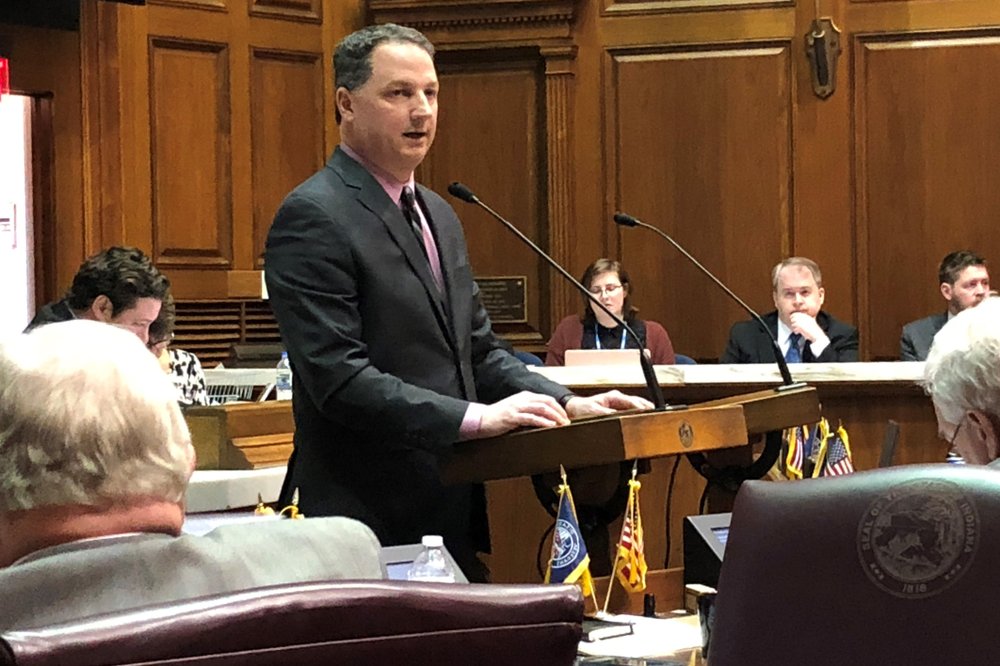 Indiana House Ways and Means Committee co-chairman Rep. Todd Huston, R-Fishers, speaks during House debate Monday, Feb. 25. 2019, on the Republican state budget proposal in Indianapolis. (AP Photo/Tom Davies)
The Republican proposal directs $572 million over the next two years toward allowing the state’s troubled Department of Child Services to keep hundreds of new caseworkers and an expected $290 million jump in state costs for the Medicaid program for low-income families. Huston said the additional $460 million that would go toward K-12 education in the coming two years makes up about two-thirds of other funding increases in the budget plan.
“The best thing we can do … is to continue the path that we’ve been on — fiscal responsibility, preparing us well for today, making the right investments for today,” Huston said.
The House Republican plan gives schools slightly more than the 2 percent boost proposed by Holcomb. It includes a $150 million state payment sought by Holcomb to pay off teacher pension obligations owed by school districts — a move that GOP budget writers say would save local school districts $70 million a year that could go toward teacher pay raises.
But nothing in the budget plan requires school districts to give such raises, and education advocacy groups estimate a 9 percent funding increase would be needed to boost average teacher pay to the midpoint of Indiana’s neighboring states.
Democrats decried Republicans for rejecting proposals to guarantee 5 percent teacher pay raises each of the next two years and increase funding for the state-funded preschool program for poor families, which now has about 3,000 children, from $44 million to $175 million over the budget’s two years.
“It’s good that we have a great climate for corporations and the business industry, we need that,” said Democratic Rep. Cherrish Pryor of Indianapolis. “But we can’t just be one-sided, we have to do something that’s going to work for every single person in the state of Indiana.”
The House and Senate, which are both dominated by Republicans, have until late April to approve a new state spending plan that would take effect in July.
Rep. Greg Porter of Indianapolis, the top Democrat on the Ways and Means Committee, said the Republican plan “has neglected the human infrastructure of our state.”
While Republicans say maintaining the state’s $1.8 billion in cash reserves is a priority to preserve Indiana’s top credit rating, Democrats maintain that could be tapped. House Republicans also rejected proposals from Democrats last week to freeze the state’s corporate income tax cuts and increase the cigarette tax by $2 a pack, which could bring in an estimated $500 million a year to state revenue.
“Our checkbook does have money,” Porter said. “We do have a way to pay for things.”