Johnson was wanted on an active warrant for multiple felony offenses.
They then conducted a traffic stop north of State Road 46, near State Road 37 in Bloomington. Johnson pulled over and fled on foot into a wooded area.
Officers from multiple agencies arrived on the scene and established a perimeter and ISP K9 Loki deployed into the woods with his handler Trooper Richard Klun, in an attempt to locate Johnson.
An Indiana State Police Helicopter directed K9 Loki to a fenced-in area, east of the intersection of State Road 46 and Arlington Road. Troopers announced they were going to deploy Loki into the fenced in area.
Law Enforcement received no response. 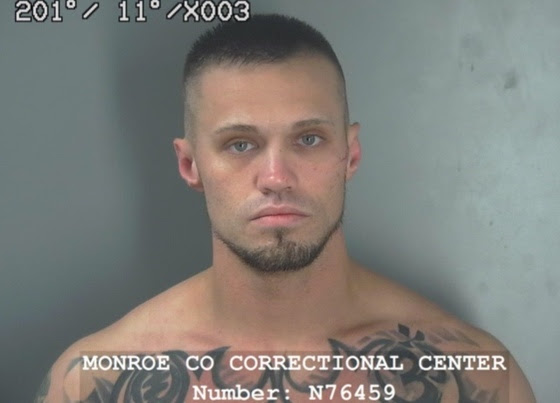 Loki was able to locate and apprehend Johnson.
After being medically cleared at a Hospital, Johnson was arrested on his active warrant and will also be facing local pending charges.
Agencies assisting at the scene were officers with the Bloomington Police Department, Ellettsville Police Department, Monroe County Sheriff’s Department, IU Health Ambulance Service, and the Indiana State Police Aviation Section.