(UNDATED) – In March 2018 a Paoli Youth Football President was arrested on child pornography charges, a former IU student was sentenced to prison in an accidental shooting; a woman was sentenced to 15 years in prison after a crash killed her two children, and a Bedford woman pleaded not guilty to child neglect charges. 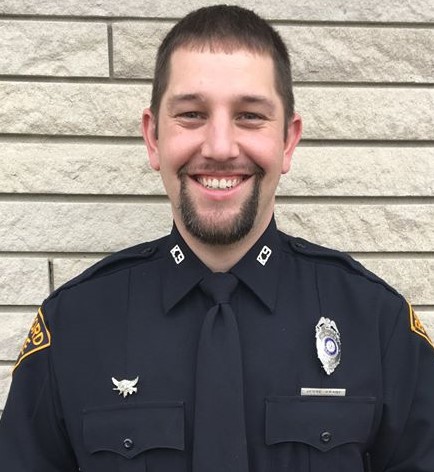 Officer Crane works with his canine partner Maximus. Crane was recognized for his outstanding work in capturing a felon that had crashed the NSWC Crane gate and appeared in Bedford a day later. The person was apprehended after stealing a car and crashing into three police cars, then fleeing on foot.
Thanks to Officer Jesse Crane and Maximus for all your hard work both on and off duty for the community.
Paoli Youth Football President Arrested On Child Pornography Charges 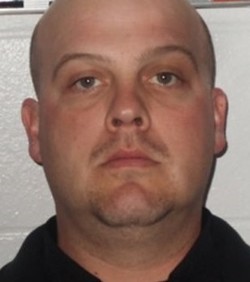 Indiana State Police arrested 37-year-old Gavin Brown of Paoli on child pornography charges
Brown, who serves as the Paoli Youth Football President, was arrested on felony charges of child pornography after he attempted to obtain nude photographs of a 14-year-old female juvenile in exchange for nude photos of himself.
Detectives presented the case to the Orange County Prosecutor’s Office and the superior court issued an arrest warrant for Brown.
Brown turned himself into the Orange County Sheriff’s Department. He is facing charges of possession of child pornography, dissemination of matter harmful to minors and inappropriate communication with a child. He later bonded out of jail.
He will appear for a pretrial conference on January 22, 2019, at 9 a.m. in Orange Superior Court.
Former IU Student Sentenced In Accidental Shooting
Former Indiana University student Jason Cox was sentenced to prison after he accidentally shot his then-roommate in the face on November 9, 2016.
Judge Kenneth Todd sentenced Cox to the maximum sentence of two and a half years in prison.
Cox pleaded guilty in January to criminal recklessness with a deadly weapon and pointing a firearm at another person.
Officers were called to an apartment in the 500 block of South Junya Street, off Patterson Drive near West Third Street, after Trenton Kirchmeier’s girlfriend called the police to report the incident.
Kirchmeier was transported to IU Health Bloomington Hospital, then flown by medical helicopter to IU Health Methodist Hospital in Indianapolis in critical condition. He suffered permanent damage to his mouth and vocal cords.
Cox told the court the ordeal began when he and Kirchmeier decided to stay home drinking and were upset that Donald Trump had been elected president.
According to the girlfriend, she and Kirchmeier had stepped outside to smoke a cigarette when they noticed, as they looked through a gap in the window blinds, that Cox had out a .40-caliber Smith & Wesson handgun, waving it around.
Cox told the court that he and Kirchmeier played a game with the gun where they pretended to be paranoid about people breaking into their vehicles outside. He was pointing the gun in a joking manner as if Kirchmeier and his girlfriend were intruders.
When he moved to pull the gun away after the joke, Cox told the court that the weapon got caught in the blinds, but his hand kept moving back on the trigger.
While this was happening, Kirchmeier approached the window and was peering inside. Heard a gunshot and Kirchmeier was shot in the mouth and fell to the ground.
Cox ran outside, apologizing, saying he had not intended to fire the weapon.
The bullet tore through Kirchmeier’s mouth, shattering his upper palate, knocking out multiple teeth and severing his left carotid artery. He was rushed to IU Health Bloomington Hospital then airlifted to Methodist Hospital in Indianapolis where he underwent emergency surgery. The doctors and his parents say it was a miracle he survived – Kirchmeier lost all of his blood three times over.
Woman Sentenced To 15 Years After Fatal Crash
A Henryville mother is sentenced to 15 years in prison on charges stating that she was high on drugs when her SUV collided with a freight train, killing her two young children. 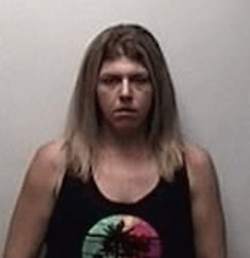 Twenty-nine-year-old Ericka Fouch of Henryville pleaded guilty in a negotiated plea deal to two counts of causing death while operating a motor vehicle while driving under influence of a controlled substance and one count of driving without a license during a hearing in Clark Circuit Court in Jeffersonville.
The judge sentenced her to nine years on each count but suspended three years on the second count.
Fouch admitted to being under the influence of marijuana and meth when she tried to beat the train in June 2017 in Henryville. The collision killed 5-year-old Adalyn Fouch and 4-year-old Wyatt Fouch.
Bedford Woman Facing Child Neglect Charges Pleads Not Guilty
Police arrested a Bedford woman on a warrant charging her with injuring her 7-week-old baby. 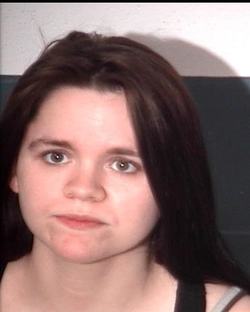 Bedford Police arrested then 24-year-old Cassandra Longest, of 1718 14th St., on a felony count of child neglect resulting in serious bodily injury.
According to a Lawrence Superior Court 1 probably cause affidavit, on April 14, 2017, Bedford Police officers were called to St. Vincent Dunn Hospital after a baby suffered bruising and swelling to the head, multiple skull fractures, and rib fractures.
The baby was rushed to Riley Hospital in Indianapolis, where medical staff determined the injuries occurred during two separate incidents.
Longest told Bedford Police, she had left her baby in the care of her live-in boyfriend multiple times between April 11 and April 14, 2017, while she was at work.
Longest told police that on April 11, her boyfriend texted her saying he had almost dropped the baby. Longest told police she noticed a bruise on the child’s face, which her boyfriend told her was from catching the baby by the head.
Police say Longest nor the boyfriend took the baby for medical treatment.
Longest then told police on April 14, 2017, she had attempted to enter the baby’s room and found it locked. She told police she eventually got into the room and noticed more bruises and swelling on the baby’s face. The boyfriend asked Longest not to take the child for treatment.
According to the affidavit, Longest told police she allowed the man to care for the child even though she knew he was taking drugs at the time.
Longest was booked into the Lawrence County jail. Her bond is set at $50,000 surety and $5,005 cash. The man has not been arrested on neglect-related charges.
Longest has a pretrial scheduled for January 16, 2019, at 9 a.m. in Lawrence County Superior Court I. She is being represented by Public Defender Bruce Andis.
Convicted Murder William Abel Sentenced to 80 Years in Prison
A Greene County judge sentenced William Levi Abel to 80 years in prison for the murder of 21-year-old Chase Aliano. 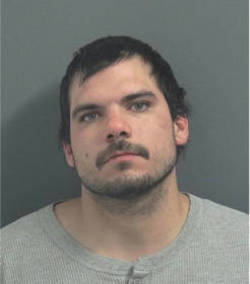 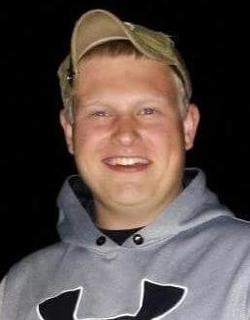 Abel shot and killed Aliano, covering up the crime by hiding Aliano’s vehicle, burning his own and Aliano’s clothes and burying Aliano’s body.
The investigation started on February 3, 2017, when Steve Aliano, Chase’s father, reported his son missing to the Lawrence County Sheriff’s Department. Chase had last seen on January 31, 2016, at Abel’s farm in Bloomfield. His family says Chase was there to sell Abel a firearm.
Mitchell Jay C Permanently Closed
The Mitchell Jay C located at 1240 W. Main Street permanently closed.
According to Tim McGurk, Regional Director of Corporate Affairs at Kroger, the store had lost more than $1 million during the last five years.
“Financial projections show that the store would suffer even greater losses in future years if left open,” McGurk said.
The 70 employees of the Mitchell Jay C were offered similar employment opportunities at other Jay C or Ruler stores.
The company took on a $600,000 remodeling project that transformed the current Jay C facility into a new and modern Ruler Grocery store.
Backenstoes Charged with Murder

Joseph Backenstoes was found guilty of unlawful possession of a firearm by a serious violent offender by a Lawrence County Superior Court II jury. After the verdict, he was charged with the murder of Travis Craig.
Backenstoes admitted at the time of his arrest to previously firing a shotgun that belonged to the Craig family. He also admitted to shooting with Craig while target practicing.
The shooting happened on October 6, 2017.
On the day of the murder, at 11:37 a.m., Lawrence County Sheriff Central Dispatch received a 911 call from Backenstoe reporting he “just heard shots fired” and “a man’s down outside my yard.”
When police arrived at the home at 5951 State Road 158 they found Craig in his driveway not breathing. Backenstoe was living with Craig at the time of the shooting. Only three people were home at the time of the shooting – Craig, Craig’s wife Debbie and Backenstoes.
Officers from Lawrence County, first responders from Indian Creek Volunteer Fire Department and an IU Health Hospital ambulance crew rushed to the scene.
Sheriff Mike Branham says Craig died from multiple gunshot wounds to his chest and head. Lawrence County Coroner Rob Herr ruled the death a homicide.
According to a probable cause affidavit, Backenstoes told police he heard eight or nine “bangs” when he was in the bathroom. He then went outside to investigate and found Craig bleeding from his chest.
Craig’s wife Debbie told police Backenstoes told her twice that he planned to kill Travis and she had talked him out of harming her husband. She told police Travis had asked Backenstoes to move out of the home on State Road 158. Backenstoes was supposed to move out Oct. 6.
On the morning of Oct. 6, Backenstoes and Travis Craig were talking in the kitchen when Backenstoes told Travis the garage had been broken into the night before, then Backenstoes and Travis Craig went outside.
Debbie told police she was in the bathroom when she heard shots fired. She said when she came out he was meet by Backenstoes who made a slashing motion across his neck and then said Travis had been shot.
When police interviewed Travis and Debbie Craig’s teenage son, he told them Backenstoes had come into his room the night of Oct. 5 and said that he loved him and that “whatever happens to me, just take care of your mother.”
Police also questioned two people who worked with Backenstoes. One person told police that a month before the murder Backenstoes told him he was having problems with someone living at his trailer and needed a gun.
The other worker told police Backenstoes asked them about getting a small gun a week before Craig’s death.
His jury trial is scheduled for April 22, 2019, at 10 a.m. in Lawrence County Superior Court II.