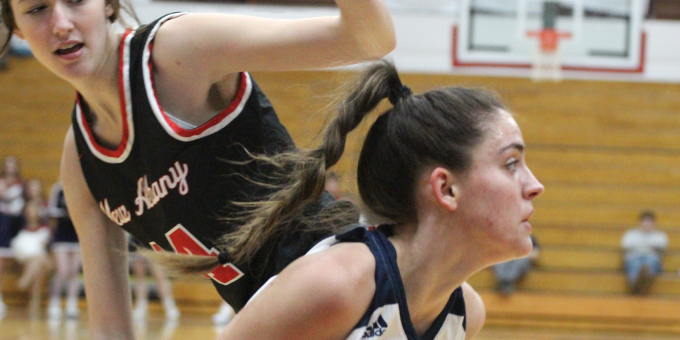 BEDFORD – After a weekend of historic personal achievements, Bedford North Lawrence will return to full strength and total focus on the first primary goal.

With senior starter Mallory Pride expected back from illness, the No.4 Stars will continue the quest for the Hoosier Hills Conference title on Thursday night, facing another top-shelf challenge when they welcome Seymour to BNL Fieldhouse.

Now that the thousand-points-of-light celebrations for Karsyn Norman and Chloe Spreen are complete, now that senior starter Mallory Pride has returned from her two-game absence while suffering through an illness, BNL will pivot to concentrate on what matters most during the regular season. That league crown has been worn by others of late.

The Owls (7-1) pose a true threat to BNL’s title aspirations. They’ve got interior size, they are defensive misers, and they know just about everything there is to know about the Stars. Of course, that’s true about every conference opponent. There are no secrets among ‘friends’.

“It’s a conference team, and everybody knows everything,” BNL coach Jeff Allen said. “You have to find some way to get an advantage.”

Seymour’s advantages? Size up front. The Owls will feature junior scoring leader Kendall Sterling (17.3) and 6-1 junior center Journee Brown (8.6 points, 5.7 boards), and they’re allowing only 35.3 points per game. Their only loss was a 48-28 setback to rival Jennings County on Tuesday night.

“They have two six-footers (including junior Claire Marshall), and that’s always an issue for us,” Allen said. “Sterling has gotten better, she’s definitely improved her game. So they have weapons. They’re playing well defensively, they play well as a unit. So we’ll have to have our best game. We’ll try to use our speed. Hopefully we can make things difficult.“

That’s the BNL advantage. Few are quicker than Spreen (21.8 points, 5.2 boards) and Norman (17.0 points, 4.3 assists), few teams can withstand the constant pressure applied by BNL defenders. Opponents are averaging 23.4 turnovers per game and shooting only 34 percent.

On the flip side, BNL is one of the state leaders in scoring (sixth at 65.9) and winning margin. With the exception of the lone loss, the Stars have been able to expose those who can’t handle the heat.

After that setback, BNL bounced back in impressive fashion, smacking Gibson Southern (73-44) and New Albany (71-31). The Stars missed Pride’s contributions (9.3 points and 5.4 boards) but took up the slack.

“I was really proud of the kids that stepped up and played minutes,” Allen said. “They did a great job, knew their roles and really played within themselves, contributed to the team. That just makes you deeper.

BNL has won eight straight in the series, and dominated last year’s clash in Seymour 64-26. BNL’s defense was spectacular that night. The Owls had only 13 points (and three field goals) until the running clock was triggered midway through the third quarter. Spreen had 19 points and Norman totaled 16. Pride added 9 points and a career-high 13 boards.

Seymour struggled to contain JC star Juliann Woodard, who scored 23 points in the win over the Owls.

Last meeting: Last year at Seymour, the Stars exploded early for a 64-26 win. Chloe Spreen had 19 points and Karsyn Norman added 16 as BNL allowed only 13 points through the first 20 minutes. Brooke Trinkle had 9 points for the Owls.

Game notes: BNL has won eight straight in the series. The Stars rank sixth in the state in scoring at 65.9 and sixth in winning margin at 31.3