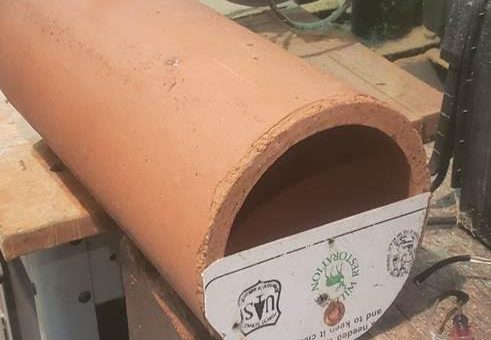 BEDFORD –  When fish biologist, Chad Menke, heard there may be clay tile pipes available he jumped at the opportunity to acquire some from Can-Clay Corporation in Cannelton for catfish after the company was going to dispose of its excess inventory.

Why would catfish need or want clay tiles – interestingly, catfish guard their underwater nests and prefer to have an enclosed area with only one entrance/exit making their guarding efforts more successful.  As a member of the Green Team, an internal group of Forest Service employees who work to make the work and operations at the Hoosier National Forest more environmentally sustainable. Menke was also excited to put something that was going to be disposed of to good use, as he could repurpose the tiles for a catfish nesting habitat.

Once Menke obtained the 8 to 18-inch diameter clay tiles, he needed a way to enclose one end of the clay pipe, and part of the other end, to create what he dubbed the perfect “catfish casa”, or man-made catfish nesting habitat.

A colleague just happened to have some old metal signs that were no longer needed that would fit that role perfectly once cut to size, leading to another material being re-purposed.

Numerous ponds on the Hoosier National Forest are routinely stocked with catfish by the Indiana Department of Natural Resources including German Ridge, Sundance Lake, Grouse Hollow, Maines, and Deer Ponds, among others.

After constructing the catfish casas, Menke began deploying them in ponds with catfish this fall.  Casas of different sizes were placed in each pond to meet the needs of a variety of fish sizes.  The structures were solidly constructed and due to the clay and metal materials, they sank to the bottom where the catfish create their nests.

In late October, an ecosystem management class from Indiana University visited their field lab. Menke and colleagues instructed them on pond management and watersheds, and the students participated in a fish survey where they caught fish and collected data on them. They also had the opportunity to deploy some catfish casas at Tincher Pond in Lawrence County.

This project is part of ongoing efforts to improve the natural resources and recreational experiences at Hoosier National Forest. Fish monitoring will continue and could determine the use of the catfish casas.  In addition to providing potential nesting sites, they provide structure in the ponds for other fish and aquatic organisms – a win for the fish and the environment.