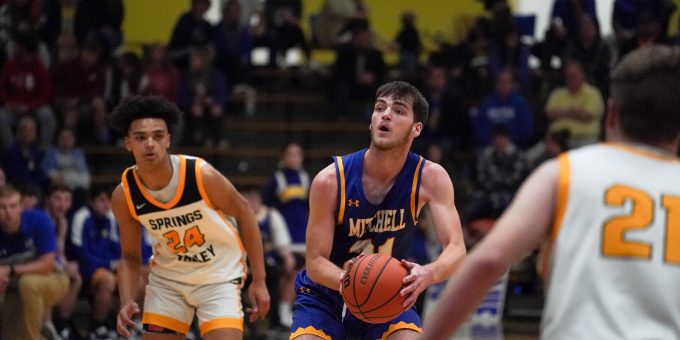 Tuesday night’s season opener for Mitchell High School against Patoka Lake Athletic Conference opponent Springs Valley was an incredible way for the Bluejackets to start their year… at least for three quarters.

Mitchell got off to a good start, leading by four at the end of the first quarter. That lead expanded to six by half-time and then ballooned to 20 points by the start of the fourth quarter.

At this point, the writing was on the wall for the Bluejackets to begin their season in a big way, with a road win against a PLAC opponent, until about mid-way through the fourth when the momentum began to shift, as the Blackhawks began to chip away at that 20 point deficit.

Springs Valley got hot at the right time, or at least their last chance to, shooting 10/16 in the final period. Perhaps more importantly though, with both teams entering the bonus early on in the fourth quarter, the Blackhawks were able to get to the free-throw line often, converting on 11/14 attempts from the stripe in the fourth.

For the next few minutes, Springs Valley proceeded to cut away at Mitchell’s advantage, with an emboldened home crowd behind them, culminating in them taking a one point lead with about one minute remaining in the game.

The Bluejackets were able to get good looks in the final minute of the game, but weren’t able to convert them to regain their lead, ultimately losing 64-60 by the final buzzer.

Though the game ultimately ended in a loss, Mitchell head coach Jackson Ryan was encouraged by his team’s performance in the game.

“It was really cool to see for three quarters what we’re capable of,” Ryan said. “They were just a young team, especially in the backcourt and when momentum shifts, you know, this is a good opportunity for us to see, you know, who’s gonna step up? How can we step up? And, stuff is not going our way? How do we react? And, you know, obviously, tonight, we need to work on that and grow from it.”

Tuesday night’s game proved to be a tough test for the Bluejackets, despite their early success in the game. Ryan believes his team will learn from this loss and carry that knowledge, along with the experience of playing a conference opponent on the road in front of a rowdy home crowd, with them throughout the rest of the season.

“Well, when the ball is going in the basket, and you know, it’s all high fives and slaps, you know, life’s good. But once momentum shifts, and you’re here on the road, in a tough environment, that conference game, you know, they hit a couple of threes and student section gets into it, you burn some timeouts. And, you know, people are doing things that aren’t on the scouting report. You’ve just got to, you know, see where you stand,” Ryan said.

“But, you know, we’ve just got to do a better job of not letting little things snowball. I think that’s the bottom line. And again, we’re a young team and we should all learn from this,” he continued.

With only two seniors on this year’s roster, Owen Modglin and Brendan Tolliver, the team is largely a mixture of new faces and younger returning players. Despite this, the team moved the ball well amongst each other, playing with a level of chemistry that would be expected from a more familiar group.

“It’s a short period of time, but really impressed with how we shared the ball. And that’s just not an overnight thing that started, you know, back in the spring, and over the summer, in the fall. And here we are. Two and a half weeks and our practices, it just takes time, but for the short amount of time we’ve had, really impressed with the chemistry and the leadership and our ability to move the basketball,” said Ryan.

The Bluejackets had three double-digit scorers on the night, Tolliver with 11 points, Ben Seitzinger with 15 points and Aiden Pridemore with 13 points.

The Blackhawks were led in scoring by sophomore Deion Edwards, who scored 24 points, with junior Konner Chase adding 17, nine of which came in that fourth quarter comeback.

Next, Mitchell will travel to Rose Hulman, where they will take on Bloomfield (1-0). Tip-off for that game is set for 11:30 a.m.