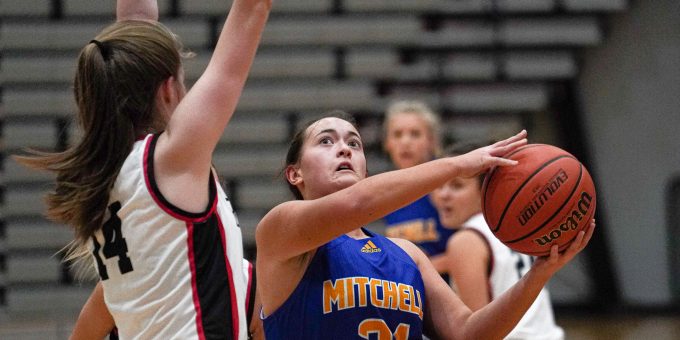 Mitchell’s matchup Saturday evening against Barr-Reeve was perhaps their most competitive of the season.

The end of each quarter came with a lead change. The Bluejackets led at the end of the first quarter, afterwards the Vikings came back and snatched the lead heading into halftime, then Mitchell battled back and grabbed the lead before the fourth.

Mitchell’s last lead of the game ended around the three minute mark in the fourth quarter, when junior Barr Reeve forward Hannah Bledsoe scored an and-one and sunk the free-throw, putting her team up 29-27.

In those last few minutes, each side was able to sink some additional free-throws, but the lead did not change for a final time, with the game ending in a 34-30 Barr-Reeve victory.

Unfortunately for the Bluejackets, they struggled to control the ball down the stretch, committing six of their 12 total turnovers in the final five minutes of the game.

“Well the turnover situation obviously played a big part, you know, and that’s, that’s what’s disappointing,” said Bluejackets coach Tim Haworth. “I mean, our kids every week, I mean every one of those kids worked so hard, but some of the mistakes that we make, for example, we have that little flurry of great defensive play. [Malaya] Tanglao made some plays there. So okay, we get a four or five point lead. And then the next three possessions down we turn the ball over.”

Mitchell’s offense started the game off hot, with forward Jillian Bond seeming unstoppable in the first quarter, scoring 10 of the team’s 12 points while shooting 5/6 from the field.

After her strong start, the attention of the Vikings defense shifted in the second quarter. The team’s only basket in the period came on a layup from guard Mylea Slone, who missed the previous night’s game against Brownstown due to the recent reaggravation of a groin injury that she has been battling throughout the season.

She was a game-time decision against Barr-Reeve, but exited the game in the second quarter after her injury flared up once again.

“She tried to come out tonight and she’s just in a lot of pain. And she tried to give him an effort tonight, but, you know, we’ve just gotta be patient and hope that we can get her better. And I’m not sure when that’s going to happen,” Haworth said regarding her status after the game.

After their shooting struggles in the second quarter, the Bluejackets found their offensive rhythm again in the third, scoring 11 points in the quarter after only scoring 14 in the entire first half. This time, the charge on offense was led by Brooklyn Peterson, who scored six points and was able to get to the free-throw line for six attempts, and Malaya Tanglao who connected on two field goals, scoring four points.

Tanglao had two steals in the third and was a major factor in Mitchell’s defensive efforts that held the Vikings to only five points in the quarter. She, as well as guard Zoey Smith and forward Taylor Lee have seen increased roles in the varsity squad in Slone’s absences thus far this season.

“Most of those kids, all their lives have been roleplayers. They haven’t been the standout player, they haven’t been the one that says, ‘you know, I’ve got to be the one to scores for our ballclub.’ They’ve been roleplayers. And now all of a sudden, they’ve been thrown into a situation where now they had to step up and make basketball plays. So that’s kind of where we’re at right now,” said Haworth.

“But I really am proud of their effort tonight. Under these circumstances, you know, coming into the season we were expecting Mylea to average between 15 and 20 points a game for us. Now that we don’t have that, that’s where these kids, that even though they’re not used to doing it, they’ve got to do it.

This loss brings the Bluejackets’ season record to 2-4, with a 1-0 record in Patoka Lakes Athletic Conference play.

Their next matchup will be Tuesday, Nov. 22 against PLAC conference opponent Springs Valley (3-2), with the game set for tip-off at 6 p.m. Last season, Mitchell defeated the Blackhawks 41-24.