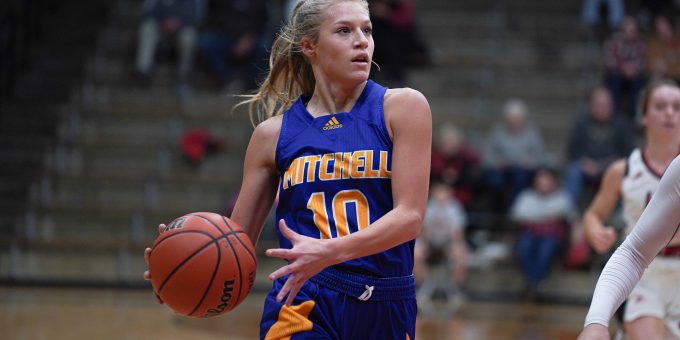 Things were going well for Mitchell in the first half of their matchup against Brownstown Central on Friday.

The Bluejackets led by two at the end of the first quarter, behind a strong start from Brooklyn Peterson who finished a perfect 3-3 from the floor with seven of their nine total points.

In the second, that momentum continued with, Jillian Bond adding six points on 75% shooting from the floor. Her scoring, combined with two made free throws from Zoey Smith and another Peterson field goal had Mitchell leading 17-16 heading into halftime.

Unfortunately for the Bluejackets, the Braves came out of the locker room hot in the third, connecting on four three-pointers, which jolted them to a quick lead. Mitchell tried to match, but were unsuccessful on every shot attempt in the third quarter, shooting 0-8 from the field over that eight minute span.

With none of their shots falling and nobody able to get to the free-throw line, they went on to end the third quarter scoreless, while Brownstown’s offense had fully hit their stride.

In what felt like no time, the Braves’ point total had doubled, while the Bluejackets’ remained unmoved. Heading into the fourth, Mitchell now trailed 32-17, a deficit that would prove insurmountable as the Bluejackets would go on to score just one more basket during the game. They eventually fell to the Braves with a final score of 42-19.

“In the third, we had a couple of things that didn’t go our way in that quarter. You know, it looked like it was just going to be a back and forth game,” Mitchell coach Tim Haworth said. “Then we had a girl drive and she got hammered, they didn’t call it. They only fouled us three times the whole half, so you can take that for what it is. But that that was a turning point. After that time, they go on a eight, nine nothing run.”

Mitchell entered the game intending to neutralize senior Brownstown guard Maddy Hackman, who has been an offensive stand out throughout her years on the team. She was the primary focus defensively for the Bluejackets, who were able to hold her to just four points in the game.

“[Hackman] has been a star for them for three years now. Senior year, she’s probably averaging in the first three games that she’s played 17-18 points a game. But that’s the one that we had to pay a lot of attention to. If somebody was going to beat us, then that somebody wasn’t going to be her,” said Haworth.

In her place stepped up senior guard Kalee Borden, who led a balanced Braves offense in scoring for the night with 12 points.

Leading Mitchell in scoring was Brooklyn Peterson, who finished the game with 11 points. Other scorers for the team were Jillian Bond, with 11 and Zoey Smith, with two.

The Bluejackets were without one of their top offensive players, Mylea Slone, who was forced to sit the game out after reaggravating a groin injury that kept her out of the season opener against Lanesville earlier this month.

“Without Mylea, we miss her when she’s not in there. When she’s in there it’s 18 points one game, 18 points another, so that’s what we’re missing,” Haworth said.

The game against Brownstown was the first of a back-to-back, with Mitchell making the trip to Barr Reeve the next night to battle the Vikings (1-2). Given the nature of Slone’s injury, as well as team playing in consecutive nights, Haworth felt it was best to proceed with caution and rest her against the Braves.

“It’s one of those things that just nags and doesn’t go away. And if you tweak it, then you’re off of it for a day or two because it’s so painful,” he said. “The games that she has played for us and done well, she’s still playing in pain. You know, the doctors told us it’s the type of injury where it just depends on what you can handle and she’s a tough kid and she wants to play. You know, she was disappointed about not playing night, but these back-to-back games, that’s just the way it goes.”

Haworth hopes to be able to add Slone back to the lineup against Barr Reeve, though regardless of who is on the floor for the Bluejackets, he knows his team will always give their best effort.

“The kids played hard,” he said. “We get Mylea back again hopefully tomorrow night, we’ll see, maybe, maybe not. But these kids are gonna play hard no matter what. I mean, no matter what the score is they continue to play hard.”

This loss brings Mitchell’s record on the season to 2-3, with a 1-0 record in Patoka Lake Athletic Conferee play.