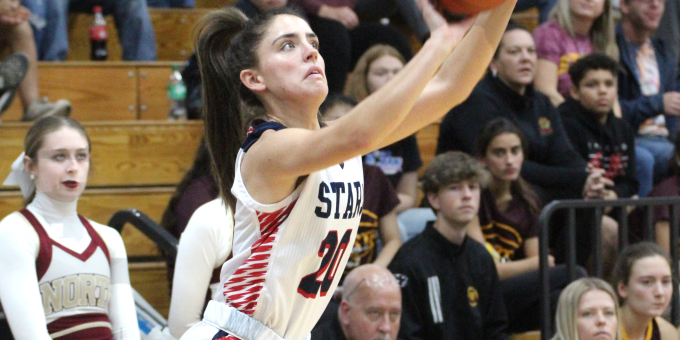 BEDFORD – Bedford North Lawrence’s goal chart each season starts with a championship it has dominated over the course of history. Top of the list: win the Hoosier Hills Conference. So here’s a trivia question. When was the last time the Stars won the crown? Bonus points, when was the last time BNL won the outright league title?

Take a minute. Think about it.

The answers might surprise some. Columbus East has won the last two titles. BNL, which has won 20 HHC championships in program history, shared three straight from 2018-20, but the last time the Stars were alone on top was back in 2015.

No.4 BNL will start the chase for that coveted prize on Saturday night, visiting dangerous Jeffersonville for its conference opener. For the Stars (4-0 heading into Friday night’s clash with North Central), it’s the start of serious business. BNL has gotten the last laugh with its 11 consecutive Class 4A sectional titles (over a field full of HHC opponents), and there’s a trophy awarded for that, but the first priority is winning a championship that doesn’t come with hardware. Only bragging rights.

“It is goal No.1, and it starts on Saturday night,” BNL coach Jeff Allen said. “It’s eluded us the last couple of years, we’d like to reclaim that crown if we can. That’s the first goal on the list, and we have to start working on that. That’s a big game for us.”

The Red Devils are off to a hot start (4-2 with a home date against Silver Creek on Friday) with a high-pressure attack under new coach Cory Norman. They’ve already posted a signature win over East Central (66-55), and they’re averaging 60.8 points per game with a style BNL will immediately recognize.

“They are still learning and figuring things out,” Norman said. “They have been playing very hard. We just need to brush up on some decision making in certain situations. Overall, we have been pleased with the process. Honestly, we hadn’t really paid attention to rankings. We preach it’s about us and fixing our issues on the court.”

BNL has won four straight in the series, including a sweep last season. The Stars won the regular-season clash 53-31. Chloe Spreen had 19 points and Mallory Pride added 14, while the Devils were guilty of 26 turnovers. La’Kyra Johnson had 10 points for the Devils. In the sectional rematch, Jeffersonville rumbled to a seven-point lead in the third quarter before the Stars battled back and prevailed 51-42. Karsyn Norman (14 points) and Spreen (13) led that charge.

Despite recent success, including a phenomenal 84-37 win during the last trip to Johnson Arena, Allen is wary of this clash.

“You’re on the road, so we have to get off to a great start,” he said. “We have to stay out of foul trouble, and we have to rebound with them. It’s a team that’s formidable, and we’re looking to get tested.”

Norman will have to figure out a way to slow down BNL’s future All-Star duo of Spreen (23.8 points) and Norman (16.8 points, 5.3 assists) and keep BNL’s defense (forcing 30 turnovers per game) from disrupting and destroying.

“My biggest concern is their experience,” Norman said. “They have some Division I caliber players. They are a very disciplined team. We must minimize our turnovers and fouls. We must also match their energy and aggressiveness.”

BNL’s defense has been a wonder to behold – unless you’re an opposing guard in the maelstrom. The ball pressure, the constant harassment, the traps and steals (17.5 per game) cause chaos.

“They’re all very knowledgeable about basketball,” Allen said of his defenders. “We have five guards out there that know how to guard and how to trap. They’re putting pressure on people and getting into passing lanes. They do it extremely well.”