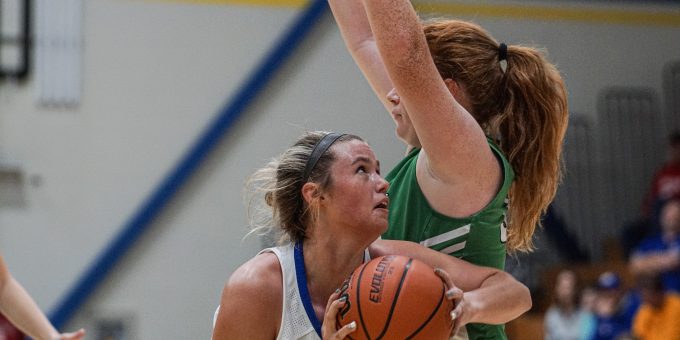 After suffering a tough loss against highly ranked Lanesville to kick off their season, The Mitchell Bluejackets bounced back on Friday, picking up their first win of the year over Pakota Lake conference opponent Perry Central, with a final score of 47-39

The Bluejackets controlled much of the game, maintaining a lead, albeit sometimes a slim one, until early in the fourth quarter when the Commodores made a run to tie up the game.

For the remainder of play, just one field goal would be scored between both teams, a layup from Perry Central junior McKenna Labhart. Outside of that, neither team could get a shot to fall. With Mitchell in the bonus, it would come down to whether or not they’d be able to convert their free throws.

Coming out of last game, where the Bluejackets were only able to convert on 36% of their 22 total free throws, this didn’t seem like a great position for them to be in.

Ultimately though, with their backs against the wall, Mitchell was able to get it done, converting on 61% of their 18 free throws in the final seven minutes.

Bluejackets head coach Tim Haworth said he expects his team, particularly those without as much varsity experience, to continue to show improvement throughout the season like they did Friday with their late game free throw numbers.

“I just keep trying to tell people we’re playing catch-up a little bit. So, we’re a work in progress,” said Haworth. “We’re just going to have to try and get better every game. And again, for some of our kids without varsity experience, they’re going it right now, but we made enough good plays and our seniors stepped up when we needed them to,” he continued.

Mitchell’s front court was dominant on the night, with forwards Jillian Bond and Brooklyn Peterson both recording double-doubles. Bond finished with 12 points and 12 rebounds. Peterson led the Bluejackets in scoring with 18 points, as well as 12 rebounds. In total, Mitchell outrebounded Perry Central 29-17.

Friday’s game was also the return of senior guard Mylea Slone to the lineup. In her first game back, Slone netted 15 points, shooting 53% from the floor.

”She added 15 points that we didn’t have before. That’s what she can do, so I’m really proud of her,” Haworth said.

Though Mitchell led for most of the game, Haworth credited the Commodores shooting efforts on the night, which he said exceeds his expectations and kept the game largely tight throughout.

“You’ve got to give Perry some credit, this was probably one of their best shooting games. That’s why sometimes I want to take scouting reports and just throw them away and burn them, because we watched them for three games and they struggled,” he said.

Perry Central had two double-digit scorers on the night: Jadyn Smith, who scored 10 points and Emily Parkour, who scored 11.

The Bluejackets won’t get much time to celebrate this win, as they return to the court again the next night, this time to take on Lawrence County rival and Class 4A rank two team Bedford North Lawrence, who enters the game undefeated on the season.

“We’ve got Mount Everest in front of us tomorrow. We’re going to do what we can do and we’re not going to worry about the score. We’re just going to come out and see if we can get some things done,” Haworth said about the matchup against BNL.