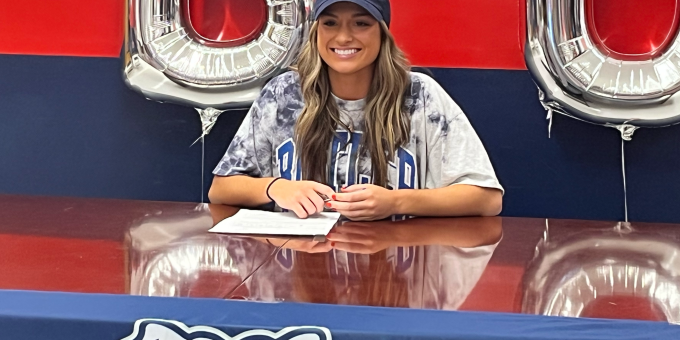 BEDFORD – Karsyn Norman has signaled and turned onto Butler Way.

Norman, an Indiana Junior All-Star and one of the top candidates for Miss Basketball, announced her decision in June, then signed the dotted line to complete a basketball dream. The only thing missing now from her sparking resume is a Class 4A state championship.

That mindset fits perfectly in the mystique and trademark of the “Butler Way.” It’s an adopted program motto that “demands commitment, denies selfishness, accepts reality, yet seeks improvement every day while putting the team above self.”

“It’s family, definitely,” Norman said. “That’s the only word that comes to mind.”

From an athletic standpoint, Norman is a coveted recruit, ranked No.6 in the state by Prep Girls Hoops. She was named Supreme 15 Underclass All-State after averaging 15.0 points, 2.8 assists and 3.8 steals last season as BNL went 24-3. She’s off to a hot start this year, averaging 17.5 points as the No.2 Stars have opened with two blowout wins.

She joins quite a parade of Div. I players who have come through the BNL program. Norman had Butler at the top of her list ever since watching former star Alexa Bailey (who helped BNL win two state titles in 2013-14).

“Ever since Alexa went there, it was like ‘I want to go to Butler, it would be so cool,’” Norman said. “It really is a dream come true. The staff I’m going to play for, I’d play for anywhere.”

“It makes me a happy guy,” BNL coach Jeff Allen said. “Kids like that are easy to coach, and they can make you look like you know what you’re doing. I don’t know why we have the talent pool we have, maybe it’s the tradition that has carried on for 30 years. We have kids that want to be good at the game of basketball, and Karsyn is one of those kids. Since a young age, she’s been special.”

Parkinson, hired to succeed former BNL coach Kurt Godlevske at the helm of the Bulldogs, made Norman’s recruitment a priority when he took over. He also signed Hamilton Southeastern’s Riley Makalusky (an Indiana Elite teammate of Norman in AAU competition).

“Karsyn is a quick point guard with a high basketball IQ who makes her teammates around her better,” Parkinson said in a press release. “She has deep range on her shot and can get after the ball defensively.

“Butler fans are going to love watching these two Indiana kids in Hinkle Fieldhouse in the years to come. Both ladies are extremely talented and will help raise the level of play within our program.”

Norman’s strength on the court is her quickness and defensive tenacity, her improved range from the 3-point line, her floor generalship.

“It’s her skill,” Allen said. “She has college-level speed, college-level skill. The range on her three is very deep, her speed is elite. And she’s a really good person. She’s going to work hard, she’s going to be a great teammate. It’s how we do things here. We put the team first, we require kids to be good character on the floor and off. That translates really well to the Butler Way.”

While working to lead the Stars toward a deep run in the state tournament, Norman is also tweaking her game to prepare for the next level.

“It’s improving my total game, cutting back on turnovers, being more efficient with the ball,” she said. “Once you get to the next level, you don’t have near as much room for mistakes.”