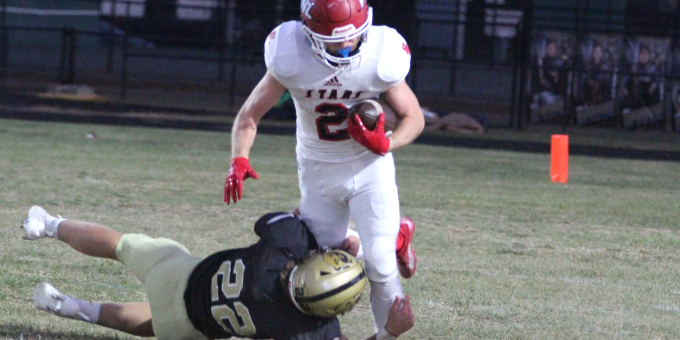 BEDFORD – Little did anyone know at that time, because Bedford North Lawrence was halfway to a third consecutive loss to start the 2022 campaign, the Stars were destined for a special season. Could have fooled most, that dark night in Jeffersonville. That’s when the light clicked on.

Down 18-0 at halftime, on the brink of disaster, BNL battled back for a crucial last-minute road victory that was the launching pad for success. What started in frustration ended with a rare accomplishments – a Hoosier Hills Conference title and a postseason win – for a senior-heavy program that hungered for both.

BNL finished 6-5, but history will look back on the season quite favorably with the first co-HHC crown since 2006, for only the 12th sectional win ever, for ending Columbus East’s dominance in the series, for the thrilling comeback that started it all. Those snapshots will be the main memories in the scrapbook, all because a game was rescued from the scrapheap.

Flash back to Week 3: the Stars were in trouble, down three scores and struggling. But here they came, with Ryker Hughes’ touchdown catch, with Cal Gates’ electric 38-yard touchdown run, and finally with Trace Rynders’ grab of Memphis Louden’s clutch pass with 16 seconds left for the game winner. From then on, BNL was a different team.

“If you had told me at halftime, I don’t know I would have believed you,” BNL coach Derrick Barker said. “It would have been easy to cash it in, to play for themselves and take a more selfish route and self-destruct. But they didn’t do it. They showed what kind of kids they are, showed the character and resolve they had. That was what propelled us forward.

“From that point on, any time we lost or took a step back, they were right back there firing on all cylinders. After the losses was when we had some of our biggest wins. That gave them confidence. They started to believe and realized we had a chance to do something special.”

The highlights following that rally captured the imagination. Gates shattered records with 270 rushing yards at New Albany. Billy Cline booted a game-winning field goal to beat Floyd Central. BNL celebrated Senior Night with a dominating win over East to claim a share of the HHC title. And finally the offensive explosion during the final six minutes of the first half while stopping Shelbyville in the Class 4A Sectional 23 opener.

While the season ended with a sectional semifinal loss at Martinsville, there was plenty to celebrate as BNL finished with a winning record for only the third time since 2011. The conference title was especially sweet.

“I was not surprised,” Barker said. “We knew we had the ability, the chance to be pretty good. I’m not one to guarantee to win a certain amount of games or a conference championship, but we had a good group and a really good offseason. The kids had worked hard. So it was realistic for us.

“It’s getting them to believe it could be done. For so many years, when Columbus East had their dynasty going, we talked about them being beatable if we worked hard and did things the right way. But there were a lot of players who thought we were talking into the wind, that it wasn’t possible. Now they see we have the ability to take the program to the next level. We showed we can compete with anyone in the HHC. It can be a conference we can be competitive year in and year out.”

BNL’s key was a 21-player senior class that included 14 starters, that defined an improved defense (allowing only 21 points per game), that was the bulk of the receiving corps and the defensive line.

“There were a lot of kids that went through some years of taking some lumps,” Barker said. “This year, that kind of flipped for us. We were able to keep a big class together, with experience under their belt, and that was huge for us with their leadership. They were able to keep calm under pressure. They had that next-play mindset.

“There were a lot of games, once we got in the flow, where we felt we would win on field position and defense. We were able to control some of those bigger games with our defense. That’s a huge advantage.”

BNL will have holes to replace. Greg Gilbert was a stud on the defensive front with 10 tackles for loss. Dylan Nikirk and Kole Bailey were top receivers, the linebacking corps was all upperclassmen, and the offensive line had experience. The Stars will build around Louden (1,421 passing yards with 12 TDs, plus 622 rushing yards and 5 scores), Gates (769 rushing yards and 8 TDs) and a solid junior class.

“We’re losing a special group, but I’m really excited,” Barker said. “We have another group coming in behind them that’s very similar, kids that have experience. They’re a tight-knit group, a hard-working group that has now seen some success. I’m excited to see them become the leaders, earn their way.”

BNL’s next goal will be postseason trophies. The Stars won their only sectional in 2011, and the new assignment in 4A created some new challenges.

“We closed the gap on the conference,” Barker said. “We’ve seen there’s a gap between us and the top teams in the sectional. We have to close that gap. It’s continuing to get bigger, faster and stronger in the weight room. And it’s understanding how to compete. It’s never fun to lose, not something you want to do. But you can learn from it.

“The biggest thing is doing things to the standard we want them done. Setting the culture. We’ve made big strides in that. The day-to-day work has to be up to a standard of greatness, to beat some of those teams that are great teams. If you want to beat those teams, you have to beat them in the offseason and every day in practice.”