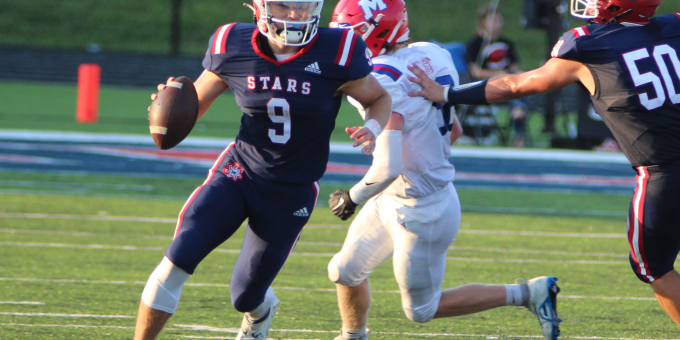 BEDFORD – In calendar terms, 10 weeks is not long. In football terms, as a team evolves and establishes its true identity, it’s a lifetime. How much has Bedford North Lawrence improved during that span? Its season lifespan now depends on that answer.

The Stars, with the momentum of a conference title and a rare postseason victory pushing them forward, will face a rematch with No.14 Martinsville in the Class 4A Sectional 23 semifinal on Friday night. The Artesians (7-3) already own a solid 28-14 win over BNL in the season opener. Will history repeat, or can BNL (6-4) make history with an upset road triumph?

That depends on how many steps BNL has made since Aug. 19. This would be a big step. BNL has not conquered the Artesians since 1992, has never won on the road during the series. The winner – and it’s been a generation since either won a title – will advance to the sectional final, to meet either No.4 East Central (8-2) or Silver Creek (5-5).

The first clash was not quite as close as the final indicates. BNL scored twice in the final five minutes. But the Stars also missed on opportunities in the first half to seize some momentum and failed to capitalize. Second chances don’t come often.

“There were a lot of things we could have done better,” BNL coach Derrick Barker said. “They got away from us in the second half. There were situations we should have taken advantage of. We’re a different team, I’m sure they’re a different team as well. I think we’re a lot better because of the familiarity, getting the reps and moving guys around to different places. We’ve found some combinations that work.“

Martinsville had the horses that night. Tyler Adkins completed 15 of 26 passes for 180 yards and two touchdowns, running back Brayden Shrake galloped for 103 yards, and the Artesians denied BNL twice in the red zone until the late surge. Despite the outcome, the Stars made an impression.

“It was so long ago and both teams are so different, but I would say I took away that BNL had some really good players and would have a good season – as they did,” Martinsville coach Brian Dugger said. “I thought they fought until the end and we’re a team that was going to cause a lot of teams issues.”

Adkins has gone on to a spectacular season, throwing for 2,056 yards and 25 touchdowns with only five interceptions. Shrake has totaled 1,061 rushing yards and 10 TDs, and receiver Garrett Skaggs has 60 catches for 828 yards and 7 scores. Those are dynamic weapons.

Martinsville’s signature win was a 35-21 conquest of Whiteland (ranked No.1 in 5A at the time). The losses (24-17 to Decatur Central, 37-31 in overtime to rival Mooresville, 21-17 to Plainfield) have all been one-possession setbacks.

“They’re a really good team,” Barker said. “They put up a lot of points, they do a lot of good things. Defensively they’re aggressive and fast. We’ll have to play our ‘A’ game.

“We have to score. Looking back at the first game, we have to put drives together. Defensively, we were on the field a lot. They’ve got athletes and speed on offense, they’ll wear you down. We have to finish with touchdowns, keep the ball in front of us. They’re really good at hitting big plays, they can score from anywhere. They’re multi-faceted. It’s not a game to go out and drop everyone in coverage and ignore the running game, or vice versa.”

Louden will be BNL’s key. He was 18 for 30 for 189 yards the first time, despite running to escape constant pressure. He also had 68 yards rushing, including one of the late touchdowns. He connected with Colten Leach (who’s been out injured since Week 3) for the other. Leach had 6 catches for 101 yards that night.

Louden has thrown for 1,330 yards and 10 touchdowns total. His top targets have been Dylan Nikirk (29 for 478 yards and 3 TDs) and Ryker Hughes (18 catches for 251 and 6 scores), while Cal Gates has taken over as the leading rusher with 743 yards and 8 touchdowns.

“I think they have found an identity on both sides of the ball and are much more comfortable in Coach Barker’s schemes,” Dugger said. “Louden looks really comfortable in the system and continues to make plays. Obviously, I tend to gravitate toward quarterback play when I watch film, and he has been impressive. They play very hard and physical on both sides. I think they are a well-coached team and have some really good players. There is a reason they won their conference this year.”

BNL just won the 12th postseason game in program history. With a win, the Stars would play in November for only the 15th time in history and host the sectional final.

Last meeting: On Aug. 19 at BNL, the Artesians rolled to a 28-14 win in the season opener. Tyler Adkins threw for two touchdowns and ran for another, while Brayden Shrake ran for 103 yards for Martinsville. Memphis Louden accounted for two late touchdowns for the Stars.