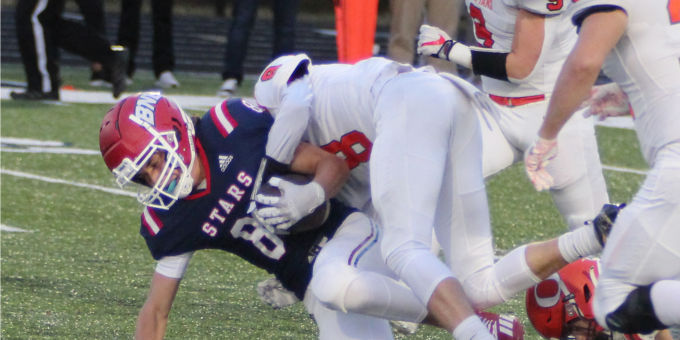 BEDFORD – Brian Glesing’s coaching philosophy, dating back to his glory days at Floyd Central, is basic, fundamental. Run the ball, pound it down the field, control the clock, shorten the game. Unfortunately, Shelbyville’s opponents took that to the extreme during the 2022 regular season. Six Shelbyville games in the Hoosier Heritage Conference ended with the mercy rule during shortened second halves.

Time for a new strategy? Nope, time for a new opponent, from the old HHC. Bedford North Lawrence, which has faced Glesing on the opposite sideline many times, will make its Class 4A Sectional 23 debut against a first-time foe when it travels to Shelbyville for the first round on Friday night. One thing is certain, somebody’s postseason will be shortened.

The Stars (5-4) have enjoyed limited sectional success during program history, winning only 11 games and one title. Only two of those victories were posted during the last 10 years, and one came against Glesing’s Highlanders in 2015. The Golden Bears (1-8) have even less of a postseason resume – no championships, no wins since 2015. One of those trends will change.

“In our league, we’re outmanned almost every game,” Glesing said. “We just tried to keep our heads above water and survive. We’ve overachieved, even though we’ve only won one game. They play hard and we get the most out of them. We’ve focused on our younger kids, getting them some quality time. We’re still learning the game.“

Shelbyville, with its only victory a 22-20 league conquest of New Castle, is a young bunch with only five seniors. That’s in stark contrast to BNL’s veteran cast of 21 seniors. Glesing has spent as much time changing the mentality and the culture as he has installing his ground-based power attack.

“That’s what we try to do,” he said. “That’s the thing we want to build here. We have a young football team, but we want to establish the running game and control the clock, keep the other offense off the field. That’s the mentality.”

The Golden Bears, with their stats skewed by all the abbreviated games, will feature the running game with juniors Axel Conover (381 yards, 4 TDs) and Luke Jackson (269 yards, 3 TDs), while junior quarterback Eli Chappelow has completed 36 of 85 passes for 607 yards and 4 TDs. Senior linebacker Carl Lux (90 tackles) headlines the defense, which has given up 42.4 points per game.

”The biggest thing, if we turn it over or don’t score and leave empty drives out there, they start eating the clock,” BNL coach Derrick Barker said. “Next thing you know, you’re in a tight game in the fourth quarter. They’re pretty good at what they do.

“I don’t envy them at all in that league. But I’m really impressed with how hard they play. It will be a challenge. It’s his same philosophy, same style. A lot of ground and pound, try to eat the clock, wear you down. This is a game where you can’t turn the ball over. You won’t have many opportunities to get it back. We have to finish drives.“

BNL is coming off a thrilling 21-3 triumph over Columbus East, which earned the Stars a share of the Hoosier Hills Conference crown. But the last time BNL faced a trap-game potential – and going on the road against a one-win opponent could fit that mold – it fell hard at Madison.

“This time of year, you can’t look back,” Barker said. “We can’t have what happened at Madison, where we were coming off a big game and looking ahead. In the tournament, you can’t have a bad day, let alone a bad week. We’ve done a good job of turning the page.”

BNL will counter with the option-based offense directed by Memphis Louden (1.141 passing yards with 9 TDs, plus 543 rushing yards and 4 scores), supplemented by running back Cal Gates (657 yards, 5 TDs), highlighted by receivers Dylan Nikirk (26 catches for 439 yards) and Ryker Hughes (a team-high 5 touchdown catches). While the offense had four turnovers last week, the defense was stellar with three interceptions and constant pressure from Greg Gilbert and friends up front.

“I was thrilled with the way they played,” Barker said. “We had some key turnovers at big times, we tackled really well.”

“It’s the same kind of kids they always have, a good running quarterback who can throw and good athletes in good spots,” Glesing said. “They’ve done a lot of good things, they keep getting better and better. It seems like, at any point, they can blow a game open. Their scheme puts you in a bind, and they’ve stopped a lot of teams.”

Series: This is the first meeting between the programs.

Game notes: BNL’s overall tournament record is 11-37, with one sectional title (2011). Shelbyville has never won a sectional championship. Shelbyville’s last sectional win came in 2015. The winner will face either Martinsville (6-3) or Greenwood (1-8) in the second round.