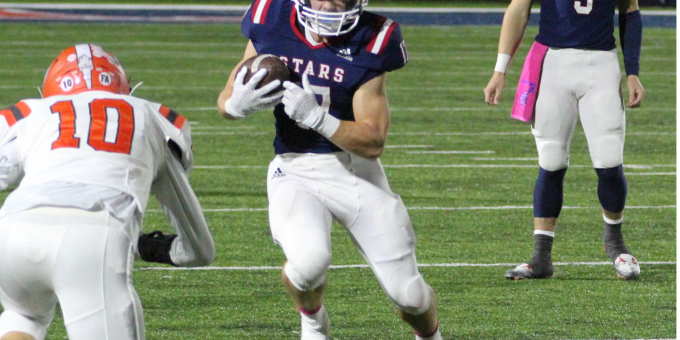 BEDFORD – The crown had some dust on it, having been packed away by a dynasty for so long. Some questioned whether it would still fit. By golly, after all those years, with some defensive spit-shine, with a little sprinkle of offensive magic, that golden jewel slipped on perfectly. Bedford North Lawrence claimed a championship, found worthy of a title with a victory for the ages.

For the first time since 2006, for only the seventh time in program history, the Stars earned a piece of the Hoosier Hills Conference title. They care not that they must share it with Seymour. Half of something is far better than nothing at all, and conquering a nemesis made it doubly delicious.

With a phenomenal defense that forced three turnovers, with explosive plays in the second half, BNL stamped down Columbus East 21-3 on Friday night, celebrating Senior Night with its first win over East since that memorable rainy night 16 years ago. BNL (5-4 overall) finished the league at 5-1 and celebrated the conquest with gusto. For 21 seniors on the roster, it was a perfect ending.

“It was long overdue,” said BNL coach Derrick Barker, the victim of the traditional water-bucket dousing, despite his commands of ‘No, no, no.” There was no stopping that wet celebration. “But man, it’s sweet, worth the wait.”

This championship was won by a defense that punched back at the bully. East (4-5, 4-2 in the HHC) won 17 straight league titles with a powerful offensive line, with a brute-force running game and some sensational athletes. The Olympians left a lot of tire marks on league opponents, especially on BNL during the course of its brutal dominance. That script was torn up this time. BNL allowed only 56 rushing yards, sacked the quarterback four times, blocked a punt, and ended the misery. East punted more times (8) than it probably did during its 17-game winning streak over BNL.

When the Stars finally came to life offensively in the second half, as they’ve done so many times this season, they roared away.

“We’ve had a lot of opportunities, a lot of good teams,” BNL’s Ryker Hughes said. “And it was always East, they’re usually really good. It feels really good to beat them.”

Despite BNL’s superiority, East took a 3-0 lead at halftime. Jamail Starks, a lineman by trade, stepped in front of a screen pass late in the first half for an interception that set up Nathaniel Hedrick’s 34-yard field goal with 16 seconds left. And when East’s Kaeden Fields picked off the first BNL pass of the third quarter, the ghosts of history were stirring. Here we go again.

Wait, hold that thought. Colton Staggs recaptured the momentum with a diving interception (the first of his career) on the next snap. When BNL ended that drive into the red zone with a fumbled option pitch, the Stars came up with another stop. BNL was still only one play away.

And they came up with it. Of all things, a halfback pass. From the last page of the playbook, buried deep and forgotten. Barker and his staff literally drew it up at halftime (there’s no dirt anymore, so it had to be scrawled on the turf) and installed it for semi-emergency use.

On first down from the 48, it was time. Memphis Louden made a quick pitch to Cal Gates, and the left-handed running back rifled a perfect pass to Hughes, who was as lonely as a NASA rover on Mars. His touchdown catch with 49 seconds left in the third quarter lit the fuse.

“Cal made an incredible throw, Ryker made a great catch,” Barker said. “From there, it was the spark we needed. Sometimes you just need that spark to get rolling. Cal is a kid who’s played quarterback before. He’s a great athlete who can do a lot of things. We had never really run it or considered it. They executed it better than you can draw it up on the board.”

“They always bit on the run, so we figured that would work,” Hughes said. “And Cal can throw a dime when he wants. I knew I was getting open.”

BNL took advantage of its momentum. East’s next punt was blocked by Collin Whittaker, recovered by Braxton Brown at the East 37, and 10 plays later – on fourth down from the 1 – Dylan Nikirk burrowed over for the second touchdown with 6:31 remaining. The final score was Louden’s 54-yard dash, a perfect option run to the right as blockers cleared a path down the sideline, with 4:33 left.

Louden finished as BNL’s leading runner with 95 yards, while Gates totaled 56. Most of that work was done in the second half. Kole Bailey had five catches. BNL overcame four turnovers. Credit the defense for holding firm when it needed it. East quarterback Ethan Duncan was chased and tormented while completing only 11 of 31 passes for 89 yards. Brayden Baker and Rhett Brinson had interceptions to end East’s final two drives.

“A lot of seniors on that defense, they’ve gone through a lot of rough times, being young and getting beat up,” Barker said. “We put that work in the bank for when they needed it, and they cashed it in tonight, They were phenomenal. It was an incredible performance.”

“Holding them to three points is insane,” Whittaker said. “That was awesome. It’s crazy that we won it.”

Crazy? BNL will now head into the Class 4A sectional with confidence. And a crown to wear.

“It’s huge, huge momentum going into the sectional,” Staggs said. “Defense was stellar, and the offense came out in the second half and put points on them.”

The Stars will visit Shelbyville for the first round of Sectional 23 next week.