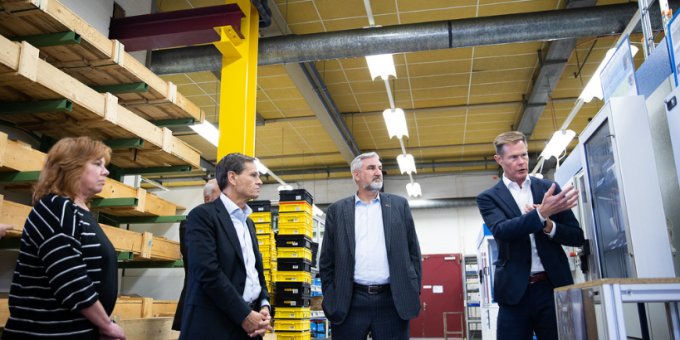 INDIANAPOLIS – Governor Eric J. Holcomb returned to Indianapolis Friday, concluding a weeklong economic development trip to Germany and Switzerland. During the trip, a Gov. Holcomb-led delegation, which includes Secretary of Commerce Brad Chambers, met some of the state’s largest foreign-owned businesses and advanced partnerships focused on industry growth and innovation in clean energy and life sciences.

“Europe is one of Indiana’s top trading and foreign investment partners, accounting for nearly half of the 1,050 global businesses operating here,” said Gov. Holcomb. “Our global partnerships extend far beyond the numbers. Germany and Switzerland in particular, have been long-standing partners and friends of Indiana for many decades. As we face new global events and economic challenges, these international partnerships are more important than ever, and I look forward to working with our German and Swiss friends to advance disruption and innovation in tomorrow’s economy.”

Gov. Holcomb began the trip in Germany, which is one of the state’s largest foreign direct investors with approximately 122 German-owned business facilities now operating in Indiana. In Berlin, Gov. Holcomb and Sec. Chambers joined the American Chamber of Commerce Germany (AmCham Germany) to host an energy-focused roundtable, joining leading experts to discuss the ongoing energy transition across Europe and the U.S.

“Indiana and Germany share many similarities and strengths across academic, business, and industry that make us ideal partners in tackling clean energy,” said Sec. Chambers. “Indiana ranks in the top five in the U.S. for new clean energy development, and I’m confident our industry and our innovators will play key roles in accelerating the development and commercialization of sustainable solutions worldwide.”

On German Unity Day on Monday, Gov. Holcomb honored the long-standing Indiana-Germany relationship and the country’s many contributions to the Hoosier State. In Berlin, he and the delegation paid tribute to Germany’s history and reflected on German American relations at prominent landmarks, including the Berlin Wall, Checkpoint Charlie, and the Reichstag.

On Wednesday, Gov. Holcomb and Sec. Chambers traveled to Switzerland, which hosts 41 Swiss-owned businesses with operations in Indiana. In Zurich, the delegation visited the future-focused global safety solutions company Dormakaba to meet with the company’s top leadership, including Riet Cadonau, Chairman of the Board of Directors; discuss opportunities to advance workforce development and apprenticeship programs, and thank the company for its investment in Indiana. Since acquiring the mechanical security business from Stanley Black & Decker in 2017, Dormakaba has invested more than $16 million in its Indianapolis operations and has created more than 100 new jobs.

In Switzerland, the delegation also traveled to Basel to meet with leading Swiss life sciences and medical device companies with Indiana operations, including Medartis, Novartis, and Roche. These companies help propel the state’s robust life sciences sector, which ranks third in the U.S. for exports, contributes $79 billion to the state’s GDP, and supports nearly 59,000 high-wage Hoosier jobs according to BioCrossroads, Indiana’s life sciences industry initiative.

The costs of the state delegations are being paid through private donations to the Indiana Economic Development Foundation.