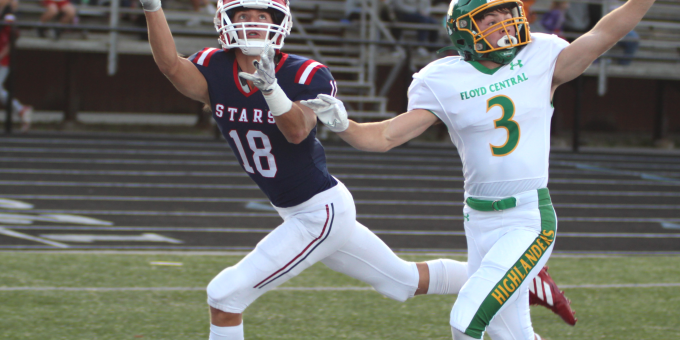 BEDFORD – For traps to be effective, the target must be oblivious to the danger, unaware of the surroundings, unsuspecting of the jeopardy. Then, like the mouse nibbling the cheese, snap! Caught. Conquered. Doomed. Gotcha.

Bedford North Lawrence, whether it realizes it or not, is in peril. The trap has been perfectly prepared. Will the Stars fall into the camouflaged pit? Or, like the Road Runner, race away unscathed to foil another Wile E. Coyote plot?

BNL faces a classic ‘trap’ game scenario this week as it heads to Madison. The Stars are coming off the emotionally-charged, last-second win over Floyd Central, they could be looking ahead to the titanic showdown with Columbus East for the Hoosier Hills Conference title (and Senior Night) next week. The Cubs are no longer members of the conference and have had little success against BNL in the series history.

The danger alarms should be blaring.

The Stars (4-3 with back-to-back wins) will make their final regular-season road trip on Friday night, looking to keep their momentum while facing Madison (3-4). The challenge will be recharging the batteries for an opponent that dropped from the HHC in 2021.

“To a lot of teams, it would be that type of situation,” BNL coach Derrick Barker said. “But I think we’re experienced enough, mature enough, we’re certainly not overlooking them.

“We enjoyed the win (13-10 over FC on Billy Cline’s late field goal). There’s the 24-hour rule, celebrate it, then you have to flush it out and focus on the next opponent. There’s no reason to have a drop-off. If anything, we want to still have the energy and attitude at a high level. We can’t come out slow, we have to start fast and be ready to roll.”

Madison has proven worthy of complete attention. The Cubs, chasing an elusive winning season, have recorded victories over Carroll Co. (Ky.), Jennings County (blowing up for 49 points) and Mitchell, and they pushed South Dearborn (now 6-1) to the limit in Week 2. They’ll be celebrating Senior Night, so there’s every reason for them to have the emotional upper hand.

They also boast one of the state’s top all-around players in senior Colin Yancey. During the last two years, he’s been one of the best receivers in Indiana, and he recently set the school record for career receptions (174 for 2,605 yards and 23 TDs). But team circumstances dictated Yancey switch to the backfield this year, so his catches are down (20, with 3 scores) but his rushing yards are up (304, with 4 touchdowns). His impact, and the attention he deserves, has not changed.

“Colin is one heck of an athlete,” Madison coach LeRoy Wilson said. “His versatility has led to a lot of his success. He is a team player who only wants to help his team win football games. If we asked him to play offensive line, his response would be ‘Yes sir!’ That’s the kind of character and leadership he brings to our team. As a play caller, you want to get the ball into your playmaker’s hands as often as possible.”

“He’s showing he’s one of the best players in the state, just an all-around football player,” Barker said. “Offense, defense, special teams, he’s a stud. They use him a lot of different way. He’s good going deep, they use him in the screen game, and now they’re playing him in the backfield. And he’s a heck of a lead blocker. He does a little bit of everything.”

Madison will also feature running back Van Skinner (478 rushing yards, 4 TDs) and sophomore quarterback Darius Jay (37 of 93 for 455 yards and 4 TDs with 9 interceptions).

BNL’s strength, a little surprisingly, has been its defense. The Stars are allowing only 20.9 points per game, and they’re coming off back-to-back weeks where that unit was the key to victory. BNL’s offense, except for the 45-point explosion at New Albany, still hasn’t reached full throttle.

“You get consistency from BNL,” Wilson said. “They are solid in the trenches. They have athletes all over the field. Their offense will attack multiple ways and their defense is stout. You have to play a very disciplined football game against these guys. They are very good at taking advantage of big plays.

“Also, I have seen an evolution in their special teams. My special teams coordinator sees a lot of similarities to how we approach the third phase of the game. I can honestly say, no one else on our schedule puts as much time into special teams as BNL does.”

Last year, all three phases were in BNL’s favor. Memphis Louden threw four touchdown passes, the Stars blocked a punt and picked off two passes, and the defense double-teamed Yancey at every turn during a 41-6 win (with the mercy-rule running clock triggered for the final 10 minutes).

If BNL wants to duplicate that domination, it will need to reduce the number of yellow flags on the field. BNL was guilty of 13 penalties against FC.

“We have to clean up the penalties, that’s unacceptable,” Barker said. “Our challenge is to play our cleanest game, no mental mistakes, take care of the ball. There’s still things to work on, it’s never a fully finished product. We’re not to that point. We have to keep building, playing our game.”

Last meeting: Last year at BNL, Memphis Louden threw four touchdown passes as the Stars cruised to a 41-6 win. The Stars blocked a punt and picked off two passes while holding the Cubs to minus-27 yards rushing.