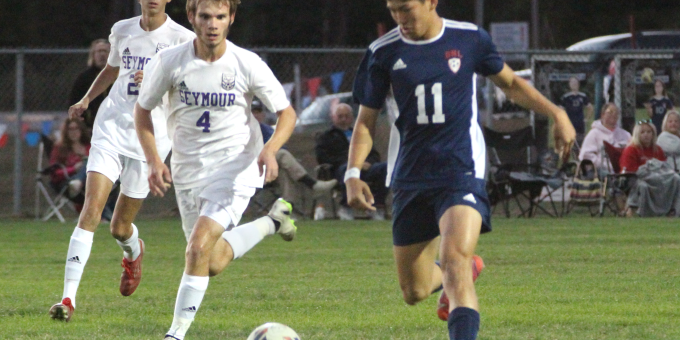 SEYMOUR – Seymour advanced to the Class 3A sectional final with a 3-0 victory over Bedford North Lawrence on Wednesday night.

The Owls (7-7-1) scored late in the first half, then added two late goals while conquering the Stars for the second time this season. Seymour won the regular-season meeting 1-0.

Seymour’s David Polbito struck first with 4:53 left in the first half. Brody Unterseher (11:19) and Martin Sebastian (8:38) added the insurance goals.

“It was very competitive in the first half,” BNL coach Ryan Otis said. “It was back and forth with several chances for both teams. When they took the lead, they were able to play more defensive and possess. That made it that much harder for us to attack.

“We played them straight up in the second half. With about 15 minutes left, we started to press and that was when we conceded the last two. It was closer than the score shows. We had several chances but just couldn’t get the right touch or connect that last pass.”

“I’m very proud of how the kids fought tonight and all season,” Otis said. “We will definitely miss the seniors. My first year as a volunteer coach was their freshman year, so they will always be a special group to me. They were the nucleus of the team and will be very hard to replace.”

Seymour will face Floyd Central in the championship on Saturday.