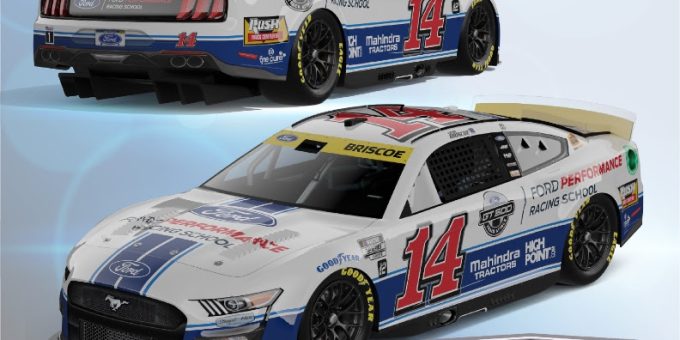 CHARLOTTE, N.C. – The NASCAR Cup Series takes on the Charlotte (N.C.) Motor Speedway Roval is in the third and final race of the Round of 12 of this year’s playoffs.

Briscoe enters the race eighth in the playoff standings, tied for the final transfer spot to the Round of 8 with fellow Ford driver Austin Cindric. Briscoe says to make sure he can hold onto that spot and move on to the Round of 8, he will have to “stay out of Trouble”.

“There can be a lot of chaos at the Roval, just like we see at superspeedways and some of the bigger tracks,” Brisco added. “You can lose a ton of positions on restarts and certain turns. If you miss a turn, it can put you behind. We just need to run a good race and stay out of trouble. We’re not in a terrible position to be able to advance but we also can’t have a bad day. It’s tough to gain points but all it takes is us not getting stage points and one of the guys in the bottom four spots winning to knock us out.”

The Roval serves as the final road-course event of the season and a fitting setting for Briscoe and Cindric, who began as teammates racing sportscars in the Trans Am Series and are battling to advance.

Ford Performance Racing School reunites with Briscoe for the Bank of America Roval 400 at the track that serves as its home base. Ford Performance Racing School is the only school to wear the Ford oval, and Ford is the only full-line vehicle manufacturer to offer product-focused experiential driving programs exclusively to the owners of its complete line of performance vehicles, from cars to trucks to SUVs.

Briscoe is fresh off his second consecutive top-10 finish and fourth top-15 in a row. His 10th-place effort last weekend at Talladega (Ala.) Superspeedway was his sixth top-10 of the season and the best Cup Series result there.

Road-course races haven’t come with the best results for the No. 14 team this year.

“It’s honestly just this car,” said Briscoe. “It’s not anything we were doing that took away the advantage I felt I had come to road courses. This car is made to drive better on those kinds of tracks. It used to be I could find areas to gain on guys under braking or figure out how to drive in harder and make a pass. The bigger brakes and things like that make it so much easier for everyone to do those things. So, I don’t know if there’s anything we need to figure out. We just have to run our race and try to be there with a shot at the end.”

In 2021, he started and finished 22nd after struggling all race with an ill-handling Ford Mustang. All three of Briscoe’s top-10 finishes during the 2021 season came on road courses – sixth at Circuit of the Americas in Austin, Texas, in May; sixth at Road America in Elkhart Lake, Wisconsin, in July; ninth at Watkins Glen (N.Y.) International in August. The week after the Watkins Glen race, the Indiana native nearly won in his first Cup Series start on the Indianapolis Motor Speedway road course.

Briscoe took home the trophy in the inaugural NASCAR Xfinity Series race on the Roval in 2018. He started ninth, took the lead for the first time on lap 18, and led until lap 26. He regained the top spot on lap 32 and stayed out front for the final 24 circuits en route to his first of 11 career Xfinity Series wins. The victory led to a full-time ride in SHR’s No. 98 for 2019 and he returned to the Roval that year to secure a ninth-place finish after leading a race-high 21 laps.