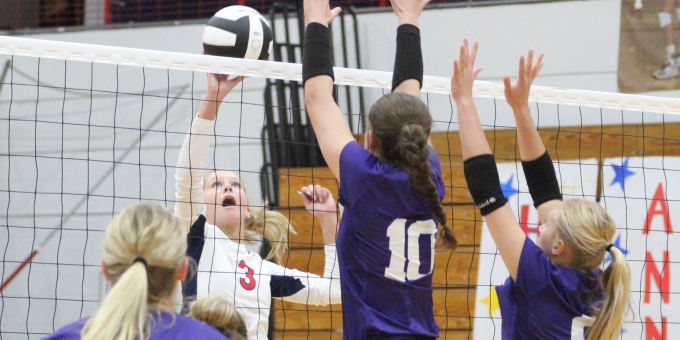 BEDFORD – Bada bing, bada boom. In true gangster style, Seymour ordered a hit on Bedford North Lawrence, which now sleeps with the fishes. It’s appropriate the hitman was the big Fish in the pond.

With senior outside hitter Olivia Fish, a Wake Forest recruit, doing the bulk of the damage, the Owls blasted to a three-set sweep of the Stars in a Class 4A sectional preview on Tuesday night, tempering the celebration of BNL’s Senior Night with a dominating triumph.

Seymour, which will face BNL in the opening game of the sectional at Jeffersonville next week, rumbled to its 15th consecutive victory with a quick 25-16, 25-15, 25-11 win. Fish didn’t let the Stars off the hook, pounding 13 kills and adding 10 digs as the Owls (26-4) finished Hoosier Hills Conference action with a 5-1 record.

The Stars (2-20, 0-6) bid farewell to the five-player senior class of Annie Waggoner, Hayley Davis, Harley Tanksley, Graycen Todd and Emma Crane, but the emotion of the moment couldn’t overcome the reality of Seymour’s power.

BNL had its moments, especially during the first half of the first set. After Crane, making her first appearance of the season while recovering from another knee surgery, scored the first point, the Stars surged to a 12-11 lead. After a Seymour timeout, the Owls responded by scoring 12 of the next 13 points.

“There’s something about the middle of the games, I don’t know what it is,” BNL coach Whitney Carroll said. “They tune out for moment. We get a little lull in our energy and adrenaline. I want to overcome that lull.”

Ditto in the second set. BNL was lurking at 11-9 when Greer Henry took the service line and ripped six straight points. And it Set 3, the Owls led 7-6 when server Raeann Baker sparked an 8-1 scoring run from the back line.

“We have great senior leadership,” said Seymour coach Angie Lucas, a Hall of Fame inductee in 2013. “When we need points, we know who to go to and who’s going to get it. It helps to have that kind of player (Fish) on the floor.”

For the Stars, the statistics were spread out but thin. Camryn Anderson had 6 kills, Davis added 6 digs, Waggoner contributed 4 kills and 4 digs, Kendlyn Alvey had 11 digs, Tanksley finished with 8 digs, and freshman setter Trinidy Bailey had 15 assists.

“We knew they have big hitters,” Carroll said. “Our biggest thing is we have to answer back. They’ll make big plays, hitting the ball big. That’s volleyball. We can’t get discouraged, we have to hit it big back.”

The seniors have gone through three coaches during their four years, and success has been limited during the last two seasons. But that has not diminished their impact.

“They are the nucleus of the team,” Carroll said. “They’ve led the charge, they’ve taught these girls what it means to play BNL volleyball. They’ve rolled with the changes and the punches, they’ve believed in this program. They’ve set the tone. I’m proud of them.”

BNL will clash with Seymour again on Oct. 13 in the sectional opener. That winner will face Jeffersonville in the semifinal on Oct. 15. In the opposite bracket, HHC champion Floyd Central will face Jennings County, and that survivor will meet New Albany in the other semifinal.

“I don’t like that,” Lucas said about the task of meeting BNL twice in nine days. “ I know it’s going to happen. I felt like BNL is really scrappy, they kept some really good balls up off the ground. I’m looking forward to the tournament, I’m very happy with the draw. But we know it won’t be easy. Our sectional is tough no matter who the opponent is.”

BNL will close the regular season at Loogootee on Thursday.