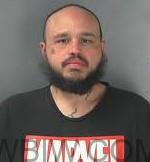 BLOOMINGTON — A Bloomington man was arrested after he threatened people with a machete on the B-Line Trail Saturday afternoon.

Police arrested Jeremy Roberts on a preliminary charge of intimidation with a deadly weapon.

According to a probable cause affidavit, four people were walking on the B-Line Trail late Saturday afternoon when Roberts approached them. Roberts then asked, “What do you have to say for yourself?”

Trying to ignore Roberts the group walked away. Roberts approached them again, asking, “What do you have to say for yourself?”

Again, the group tried to walk away, but Roberts continued after them, pulling out a serrated edge machete from his sweatshirt pocket. One member of the group told police Roberts pulled back the machete as if he was preparing to swing it.

The group ran away, as Roberts continued to stare at them.

When police arrived, they patted Roberts down, noticing a large bulge in his front sweatshirt pocket. During the pat down, they found a machete in that pocket, according to the court document.

Roberts told police that he was walking down the trail but didn’t approach the group. He admitted to taking out the machete but claimed to have kept it sheathed.