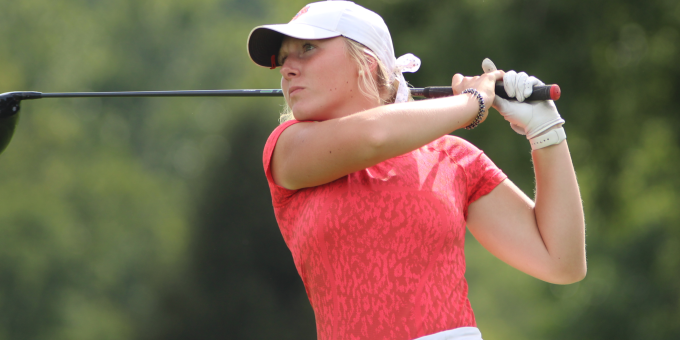 CARMEL – Prairie View, a sparkling golf course with claws, left some scratch marks on Bedford North Lawrence during the opening round of the 50th IHSAA state championship on Friday.

The Stars carded a team total of 403 and settled into 16th place in the 18-team field heading into Saturday’s second and final round.

No.3 Center Grove claimed the overnight lead at 320, locked in a duel with No.1 Carmel (323). No.2 Castle was eight strokes off the pace in a tie for third with Culver.

The Stars, making the ninth finals appearance in programs history, struggled to card pars on the tough, demanding layout. Chloe McFaddin carded a 94 (with four pars), Kenley Craig parred two of her first three holes and finished with 98. Kinleigh Root added a 102 (with one par) and Ellie Horton capped the team scoring with 109 (with one par). Nora Howat, the lone senior, had three pars but totaled 121.

“It was a little rough today but it’s a learning experience,” BNL coach Kori Johnston said. “Our ballstriking wasn’t great today, but we did our best to hold it together. It’s a new course for them and plays much longer and tougher than any course we play at during the regular season.

“Scores were a little higher than we expected but I’m proud of them for grinding it out. We have one round under our belt now and some of the state tournament nerves are gone – or at least minimized. So we’re planning to come out tomorrow with a fresh start and finish this tournament out strong.”

Columbus North freshman sensation Ava Bunker carded an amazing 3-under 69 (with five birdies) to take the first-round lead in the medalist competition, five shots ahead of Batesville freshman Ava South.

First Round at Prairie View