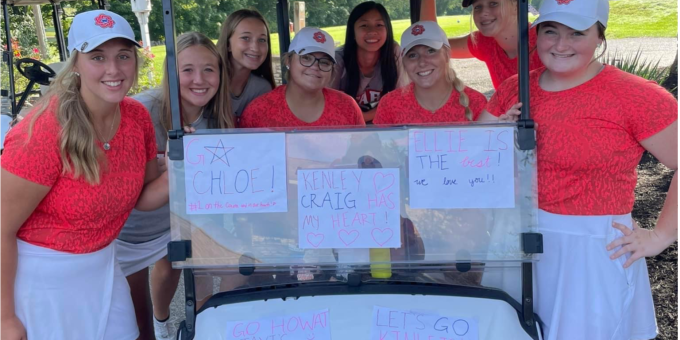 BEDFORD – Golfers, chasing perfection in a game where it doesn’t exist, have to be a little crazy. Just a swing away from the psychiatrist couch. Laughing is the best self-defense mechanism for crying, lest a club-throwing fit of rage erupt from the most calm of individuals.

Just listen to some of the classic quotes about the game:

“Golf can best be defined as an endless series of tragedies obscured by the occasional miracle.”

“We learn so many thing from golf. How to suffer, for instance.”

“My psychiatrist prescribed a game of golf as an antidote for the feelings of euphoria I experience from time to time.”

And finally, from Roy McAvoy, the classic character so perfectly captured in the ultimate golf movie “Tin Cup”: “First thing you must learn is this game ain’t about hitting a ball in a hole. It’s about inner demons, self-doubt, human frailty, and overcoming that crap. What kind of doctor did you say you were?”

Kori Johnston knows all this anguish, as an accomplished player herself. Now the Bedford North Lawrence coach can add “psychiatrist” to her job title. She has taken, as patients to test her patience, a fivesome of insecure, self-doubting teenagers and convinced them they can achieve what they deemed impossible.

The Stars will compete in the IHSAA state finals at Prairie View Golf Club on Friday and Saturday. They’re making the first appearance in the championship since 2018 and the ninth in program history. They won a sectional title (the 10th straight, by the way) and finished second at the regional to earn the trip to the final stage of the state tournament series.

And none of them – except for their coach – thought they would end up here. Crazy? Or reverse psychology? Head games? Or good games? Underpromising and overdelivering? “The way they talked,” Johnston said, “they didn’t think they had the ability to make it. But they saw they really do have the potential.”

“We had to not believe it, to a certain extent,” senior Nora Howat explained. “So we wouldn’t have the high hope, if we didn’t make it. The disappointment would have crushed us all.”

It’s quite an eclectic collection Johnston has on her couch. Howat, the lone upperclassman who’s the slowest player and always late. Ellie Horton, timely but stubborn, always a little stressed about something. Kenley Craig, the quietest, most laid back and nicest (as voted by her teammates). Kinleigh Root, the freshman who plays fast and needs a fashion lesson (again, her peers talking). And Chloe McFaddin, the loudest, most competitive, bossiest leader who plays best when distracted on the course.

Yet there’s a mental toughness among them. As the Stars vaulted into the state rankings, they didn’t back down. On some days when tough rounds ended in tears, someone else picked them up. They’ve made it where they didn’t think they could go.

Now Johnston will have to convince them to not be satisfied with just being there. BNL is ranked 17th, and the finals field will include powerhouses like No.1 Carmel, No.2 Castle, No.3 Center Grove, No.4 Westfield . . . and so on. The Stars would settle for 17th – just beat one team – and be content.

“I know we won’t place super high,” McFaddin said. “Our expectations are to play to the ranking they gave us. And to have fun. Because we’re there.”

Again, underselling the expectations. Prairie View is a tough, difficult track that only Howat has seen. Nobody promised this would not be difficult.

“One of the biggest factors of the course is it‘s really long,” Howat said. “You have to know where you want your ball to go, and then deliver that.” Of course, that’s golf in a nutshell.

“We did the hard part,” Johnston said. “We made it, that was our ultimate goal. That’s a check in the box for us. I just want them to go out and play the best they can. I know it will be the toughest course they’ve ever played. I just want them to have fun and enjoy the experience, because we definitely plan to come back.

“We’re not going to let our foot off the gas. I just want them to post a good score, and wherever that shakes out, that’s where we end up.”

The most difficult part was surviving the regional. BNL didn’t have its best day – “I was a little stressed out. We had pressure from so many people telling us we could make it,” Horton said – but advanced without much actual angst. Now the most stressful part of this week will be the send-off party at the school, when the marching band and cheerleaders will lead a team parade through the second floor of the building on Thursday morning. The Stars better plan on wearing red shirts to match the red faces from the embarrassment of the spotlight.

Of course, they should be used to parades. They’re followed by the largest entourage of family-driven golf carts ever.

In reality, if Johnston the psychiatrist can get them to admit it, they’re enjoying every minute of it. There’s pride behind the laughter. Johnston never got to experience this as a BNL player. She will tell them to soak it all in.

“It’s awesome,” she said. “I always came up a little bit short. So it’s awesome to see these guys and all the excitement on their faces.”

BNL will tee off in the first round between 10-10:36 a.m. on the 10th tee on Friday, playing with partners from Noblesville and Homestead.