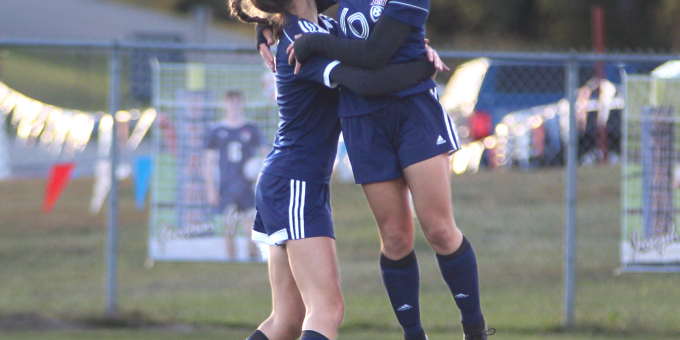 BEDFORD – After the impromptu rendition of the national anthem, a cappella from both teams that was necessary because of a technical glitch, Bedford North Lawrence finally had something to sing about. The losing streak is over, and that should be accompanied by the Hallelujah Chorus.

Finally, after two long seasons and 24 straight losses, the Stars celebrated – with shrieks of joy and multiple hugs – a victory. Rose Dusard’s equalizer late in the first half and Sydney Hallatt’s go-ahead goal midway through the second powered BNL to a 2-1 win over Austin on Wednesday night.

Celebrate good times, come on! For the first time in 27 games, dating back to the 2020 regular-season finale against North Harrison, the Stars could smile when the final horn sounded. BNL tied Bloomfield last season, but that wasn’t going to be good enough. It was time to win.

“It’s amazing,” BNL senior Lily Dusard said. “We knew we could do it. We just all pulled through.”

The Eagles (0-13-1) survived Lily’s early shot onslaught – three close-range chances that got swallowed up by the goalie – and took the lead when Kaitlyn Madden gathered a deflection and snapped a shot past BNL keeper Maya Fahr into the left corner at 23:57 of the first half. In the past, that would have signaled the end and the inevitable. Not this time.

“It doesn’t mean it’s over,” BNL coach Bret Roberts said, repeating some of her constant sermon and halftime speech. “Soccer is a long game. You can’t give up. As soon as you give up they’ll score again. You have to keep pushing.”

BNL (1-12-0) finally pushed back. Rose Dusard ran down a long breakaway pass and rifled a shot into the left corner with 4:07 left in the half. That was a shot of life.

“When my sister scored, I felt better about the game,” Lily Dusard said. “It riled us up and made us work even harder. We knew we could win this game.”

While BNL’s defense, with Cora Thomas keeping a shadow on the swift and dangerous Madden, staying solid, the Stars needed another goal. Hallatt, charging hard down the right side, ended a long run for possession with a crackling shot from the right wing that clipped the left goal post and bounced in with 17:29 left.

“It was so awesome, to have that feeling,” Hallatt said. “It means the world to us. None of us got down, we kept our heads high. We knew. And it happened for us.”

The countdown from that point was excruciating. Time crawls when the clock gets glanced at every few seconds, and Roberts admitted she was guilty of that. When the scoreboard went to zeroes, BNL had heroes.

“We’ve had it coming for a long time,” Roberts said. “We’ve had some unlucky games that could have gone either way, we finally got one in our favor. It’s well deserved after some of the battles these girls have put up, some of the things we went through the last couple of years.”

BNL will now seek its second straight win when it hosts North Harrison on Saturday.